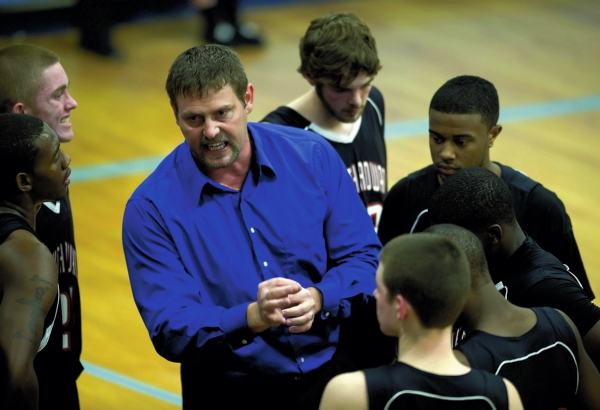 Jon C. Lakey/Salisbury Post file photo In a file photo from Jan. 28, 2010, John Davis coaches the South Rowan boys team during a game at West Rowan. South officials announced on Monday that Davis is returning to coach the Raider girls after being away from the game for three years.

That wasn’t a surprise. The shock is that his replacement is John Davis, head boys basketball coach at South Rowan for 13 seasons, 1999-2012.

Smith coached South Rowan to the South Piedmont Conference championship in 2014-15 and was the Salisbury Post’s Coach of the Year. He exits after six seasons and a 66-82 record. The Raiders were tough his last two seasons, with records of 18-10 (second place) and 18-7.

South Rowan graduates 11 of the 13 girls on the roster, including college signees Avery Locklear and Cassidy Chipman, two of the top six scorers in school history. It’s an appropriate time for a new coach to start over with new players, although Smith says the determining factor in his decision was his family.

“My girls are only going to be young once,” Smith said. “Basketball is a lot of three-game weeks and late practices, and there were times when I’d go four days without my girls even seeing me. My oldest daughter was starting to ask where daddy was, and that’s kind of crushing.”

“We know where he’s coming from,” she said. “He’s got a young family and you don’t get those days back. He’s been coaching football (offensive line) and basketball back-to-back, for a lot of years. That’s a very tough haul … long hours away from the family.”

Smith, a P.E. teacher, will be on the football staff of new head coach Daniel Yow.

“We just found our new football coach and we lost our boys basketball coach (Bryan Withers got the Salisbury job), so I was a little stressed when we lost our girls basketball coach,” Chrismon said. “But I got a text from (jayvee coach) Hunter Fuller, and he said we had a great basketball coach, and he was already here. When he said it was John Davis, I thought they were joking at first, but I’m glad they weren’t.  Everything is going to be all right.”

Davis was a great player for the Raiders in the 1980s when they were competing in the 4A Central Piedmont Conference. He averaged 15.8 points per game as a junior and 17.7 as a senior. He was CPC Player of the Year once and first team All-Rowan County twice. He only played two varsity seasons at South Rowan, but he’s still ninth on the school’s all-time scoring list.

Basketball took Davis to an education at St. Andrews College in Laurinburg. He came back to Rowan County with a degree, and after brief stops at East Rowan and Salisbury, he returned to South Rowan in 1993. South Rowan had a freshman basketball team when it was a big, 4A school and Davis coached it. Then he moved up to the jayvees. Then Davis was varsity assistant for a year. He was groomed for six years to follow Bob Parker as head coach and was named varsity coach in June, 1999.

Parker was Davis’ coach when he played at South Rowan, and he had a favorite story that illustrated Davis’ character. The Raiders were at a basketball camp at Wingate when Davis was still a jayvee and the team was headed to an R-rated movie. Davis wasn’t allowed to see R-rated movies, so even 60 miles from home and on his own, Davis wasn’t buying a ticket to an R-rated movie. He and a teammate went to see “Ghostbusters” instead.

As South Rowan’s head boys coach, Davis was 114-209, but for a lot of that period, he was coaching against 4A city schools with more height and more speed. He coached against players such as West Forsyth’s Chris Paul, and it’s not like the Raiders were going to thrive in that matchup.

The 6-foot-4 Davis coached two sons, Derek and John, who were good players. He got out of the coaching business a few years after they graduated.

“I was burned out, and that first year, I didn’t want to see a basketball game, even a pro or college game,” Davis said. “But after a while, the itch comes back and the passion comes back. I’m at a different place in my life now than I was a few years ago.”

The love of the game is back for Davis, and he’s fired up about making his girls coaching debut in his mid-40s. He says his interest in coaching girls isn’t new. He was a candidate for the South Rowan girls job back in the 1990s.

“I had a lot interest when the job came open after Perry Bradshaw resigned (after the 1995-96 season),” Davis said. “Our principal (Dr. Alan King) had a different plan for me as the next boys coach.”

There are positives about coaching “young ladies,”  as Davis refers to them.

“They listen,” Davis said. “A lot of boys feel like they already know the game when they get to high school. Young ladies are eager to learn. They do what they’re coached to do.”

“Jarrod has done a great job, and we’ve got a program to build on,” Davis said. “We’ll put the time in and we’ll go to work.”

Notes: The Raiders have started the process of finding a boys basketball coach who is a match for one of their classroom openings.