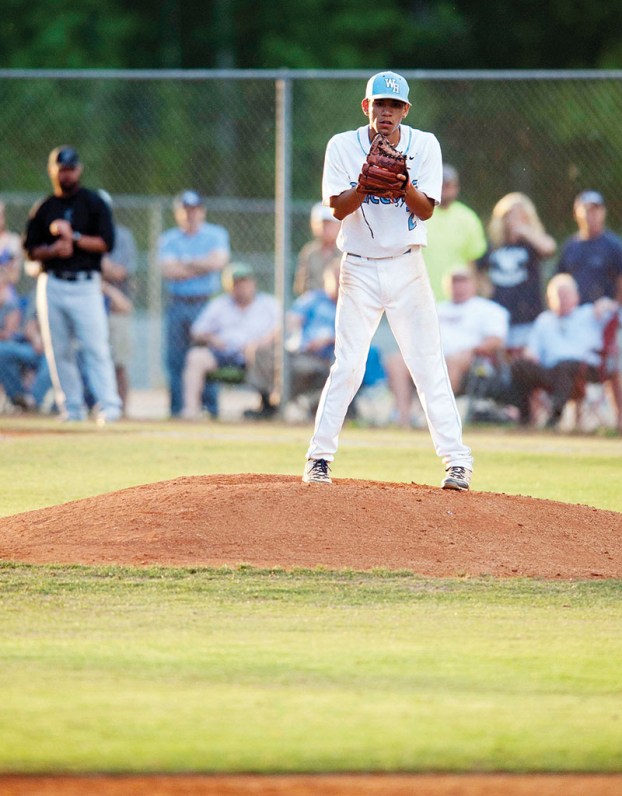 JON C. LAKEY / SALISBURY POST West Rowan pitcher Omar Bautista on Tuesday against Gastonia Forestview in the third round of the 3A state baseball playoffs. West Rowan falcons advanced in the state playoffs after outlasting the visiting Forestview.

MOUNT ULLA — West Rowan’s Omar Bautista hasn’t walked a batter since April 13, and he had no interest in walking one in Tuesday’s third-round 3A state playoff game against Forestview.

Credit for West Rowan’s 3-2 victory against Forestview’s Jaguars goes mostly to Bautista, who is now 9-1 with a 1.56 ERA. He struck out seven Jaguars. For the season, he’s struck out 65 while walking nine.

“That was a tough matchup — that team from Gastonia came here ready to play,” Bautista said. “But I felt like I was in command all the way, and I was never nervous. Everything was working for me.”

Forestview starting pitcher Garrett Sutton was excellent after the first inning, but the Falcons got two runs early. Jeremy Simpson and Kacey Otto sent doubles whistling to the center-field fence for the first run. Atwood’s infield hit scored Otto from third base for a 2-0 lead.

“Getting two in the first inning really helped,” said Bautista, who mowed down the first nine batters he faced.

Forestview (17-10) has made a habit in the playoffs of getting down and then charging back, and the Jaguars did it again. Moe Neal’s leadoff single in the fourth got this team started, and Lander Maness and Sutton drove in runs for a 2-all tie.

“The scouting report we had on their pitcher was that he was a guy who would hit spots all night, and that was accurate,” Forestview coach Brian Horne said. “Bautista pounded the (strike) zone and stayed away from our hitters. But then we got Moe on base to start the fourth inning, and when he gets on, we perk up and show some fight. After we tied it up, it was going to come down to whoever made a mistake.”

Atwood’s clutch double to left-center with one out in the West Rowan sixth led to the decisive run.

“I just went up there being aggressive,” Atwood said. “That pitcher was throwing a lot of first-pitch strikes. Nothing down the middle, but still pitches you could make solid contact on.”

The failed pickoff attempt that sent Wyatt Martin, the courtesy runner for Atwood, to third base proved a fatal mistake for the Jaguars. Martin scored when Austin Love grounded a 2-2 pitch over the mound and into center field with two men out.

“That pitcher got the ball to you quick, but I was seeing him for the third time,” Love said. “That helped me get my timing down. He tried to go away from me on 2-2, but it was over the plate and I was able to put it on the ground hard.”

“Our pitcher got a glove on it — just a seeing-eye single,” Horne said with a sigh. “You’d rather see someone drive one in the gap to score the run that beats you.”

The Falcons (20-6), who reached the 20-win plateau for only the fourth time in school history, will take it.

“We knew it was going to be that kind of game,” West Rowan coach Seth Graham said. “I wish we’d hit better, but we did get some timely hits. Mostly we just trusted our pitcher to be a little better than their hitters.”

Bautista was. Forestview got the tying run to third with outs in the seventh, but Bautista calmly ended the game with a strikeout.

Bautista has won as many games this season as he did in his sophomore (4-4) and junior (5-5) seasons combined.

He’s been luckier, and he’s also had a championship team behind him for the first time. Otto made a diving catch in the first inning in center, and Simpson, the shortstop, made a fine backhand play in the third.

“We’re going to the fourth round,” Bautista said. “That feels pretty good.”

Next for the fourth-seeded Falcons is a trip to No. 1 seed Marvin Ridge. The Mavericks pounded Weddington 9-0 on Tuesday.

SALISBURY — The final chapter in Salisbury’s girls soccer season has been written — and it’s not exactly a happy... read more