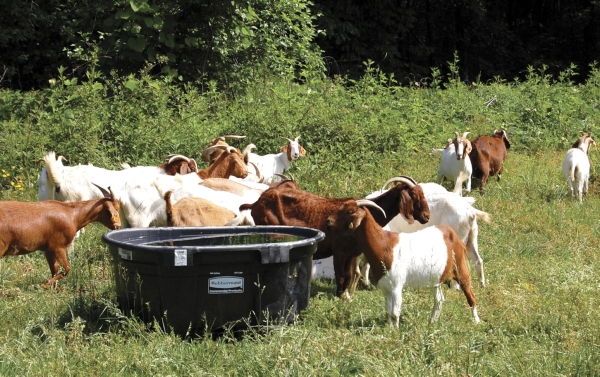 A new herd of goats arrived Sunday to the gully along South Salisbury Avenue in Spencer. The goats purpose is to eat Kudzu, an invasive vine.

The goats are kept in an area surrounded by an electric fence.

SPENCER — The goats are back.

A new herd of goats is munching away at the kudzu in the gully along the 1300 block of South Salisbury Avenue adjacent to Springhill Drive, continuing the work started last fall by other goats.

Kudzu is an invasive vine native to eastern Asia. It had completely covered the area in and around the gully before the previous herd of goats devoured nearly everything in sight. Using goats is touted as an environmentally friendly way to clear land.

In all, 30 goats will be used this time around — the number was originally going to be 42, but it was decreased to ensure the vegetation is eaten at the most effective rate, according to Spencer Town Manager Larry Smith. The new group of goats belong to David Lee with the Carolina Mountain Land Conservancy. Lee raises goats used for invasive plant control and decided to use fewer goats.

The goats should be in town for around three weeks, Smith said. The area they’ll stay in, day and night, is surrounded by an electric fence.

Spencer was able to get the goats through its partnership with the LandTrust of Central North Carolina.

The goats received a lot of attention last fall, and this time around the town has made a side trail connecting the Stanback Trail to the rear of the gully so people can see the goats from another perspective. People can park off South Rowan Avenue to get to the Stanback Trail.