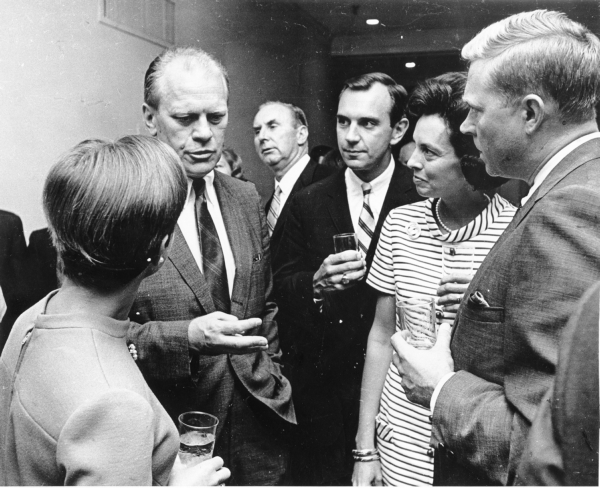 In this photograph from October 1968, U.S. Rep. Gerald Ford, R-Mich., is shown talking with Earl Ruth supporters at a Country Club of Salisbury reception. Ford was in town to campaign for Ruth, who is in the background, just right of Ford. Ruth was the GOP nominee for the 8th District U.S. House seat that year, and he would go on to win the November election. Ruth and Ford had first met in 1942 when they were in the Naval Pre-Flight School in Chapel Hill. That October 1968 day in Salisbury, Ford met with the news media at Home Savings and Loan Association and appeared at a $50-a-plate dinner for Ruth the same evening at the country club. Ford, who also was presented a key to the city, already had been a member of the U.S. House for 20 years, and Ruth went so far as to introduce him as the next speaker of the House, though Ford would not secure that position. Offices he would assume later, of course, included the vice presidency and, when President Richard M. Nixon resigned Aug. 9, 1974, the presidency. A month later, Ford pardoned Nixon for any crimes Nixon might have committed while in office., removing the possibility he might be prosecuted for his role in the Watergate break-in and its coverup. As a congressman, Ford visited Salisbury at least four times in campaigning for other Republicans. He lost his own election bid for president in 1976 to Democrat Jimmy Carter.

Bucket List Girls inspire each other with ‘purposeful fun’