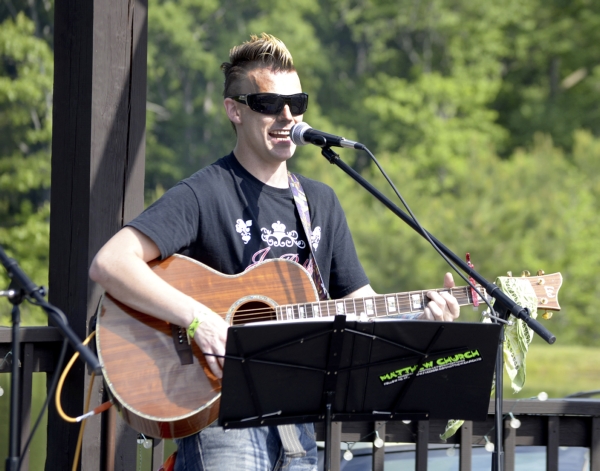 GOLD HILL — Out on the lawn at Morgan Ridge Vineyards, they were sitting on hay bales and under tents, enjoying good food, beer and wine Sunday at the annual Riot in the Pasture.

What made it even more special, organizers said, is that almost everything being offered was made from ingredients produced in North Carolina, if not here in Rowan County or close by.

Local advocacy group Bread Riot presents the annual “farm-to-table dinner” as a celebration of food raised by farmers in and around Rowan County.

“Everyone seems to be having a really good time,” said Eric Bowen, executive director of Bread Riot. “I’m hoping they’ll be blown away by how good local food can be.”

Amy Hoffney Poirer, of Bread Riot, said the event had drawn well over 400, “an excellent turnout.”

“Our goal is to increase both the consumption and the production of foods locally,” Poirer said. “We try to source locally, try to work with local farmers to encourage them to contribute to events like this.”

Poirer said Bread Riot works to accomplish this by encouraging local agriculture, and helping inform local shoppers of the options available to them.

“We are an incredibly diverse area,” Poirer said. “We have alpacas, we have beef production, we have pasture-raised pork. We have so many local farms … and they grow so many different things throughout the year.”

“Locally-grown” isn’t just for food. New Sarum Brewery was pouring three beers at Riot in the Pasture, each made with local ingredients.

Andy Maben, of New Sarum Brewery, said one of the beers being offered, the 142 Blonde Ale, was brewed with N.C.-grown, stone-ground corn grits and malt kilned in Asheville.

Another beer, dubbed Bread Riot, “is 100 percent brewed with Rowan County-grown products,” including hops grown in Faith and honey from Renn Bee Farm in Salisbury.

Maben said that he enjoys sharing information about local agriculture with people in the community.

In addition to their wines, “Between last year and this year, Morgan Ridge is making a lot more beers using local ingredients,” Eric Bowen said.

As people lined up to try barbecue from Wild Turkey Farms and Team Two Pigs, Gian Moscardini made ready to serve up vegetarian pizzas from Salty Caper.

“I think every (ingredient) is from within a 60-mile radius,” Moscardini said.

Among the options: a pizza with fire-roasted tomatoes, goat cheese, arugula and a Cheerwine vinaigrette reduction.

“I want to show Salisbury that I’ve been dong local forever, since I opened the doors nine years ago,” Moscardini said.

Pat Stack, of Salisbury, said she wanted to come out to Riot in the Pasture because she supports local agriculture. Besides dinner, she’d purchased a bag of dried North Carolina apples from Miknik Farm, of Mocksville.

Her friend, Laura Jensen of Salisbury, said the two come to Morgan Ridge often, but this was their first time at Riot in the Pasture.

A short distance away, Lee and Domisty Menius helped put the finishing touches on a whole-hog barbecue — a pig raised at their Wild Turkey Farms, in China Grove.

“Anytime we get an opportunity to get out here and educate people on eating local, supporting local farms, it’s good,” Domisty Menius said.

Caroline Waller, of Salisbury, was one of a large group of friends who came out to support the event, having heard about it from friends.

“We’re enjoying the fellowship and the music. And we’re really excited about the food,” Waller said.

Daniel Matangira, who runs a recycling business in Salisbury, said it was important for locals to help support their neighbors.

“If you support local businesses, they support you. It’s a mutual interdependence,” Matangira said.