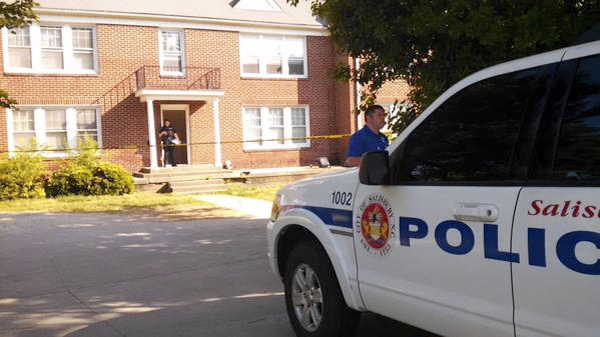 Shavonne Walker/Salisbury Post A gunshot victim was reported in the 1000 block of South Fulton this morning.

Word quickly spread as family and friends gathered near the scene, waiting for any confirmation.

“I’m just really speechless. When we got out here and we found out it was indeed Steven. It’s just horrible,” said Jamilla Kennedy, a family friend.

She’s known Steven Rosario since he was a child and said her daughter dated him. Kennedy called Rosario “bright,” and said he came from a good home with loving parents.

His parents reside in Jacksonville, Fla., and according to Kennedy and family members, they were on their way to Salisbury.

Jessie Horton, a relative, received a call from Rosario’s mother. She’d heard there was a shooting and wanted them to check on him. She and her husband rushed over to the apartment and were told of the news.

“He was very happy, respectful, everyone loved him,” she said.

Horton said Rosario would visit her family to spend time with her children.

“He was just a good kid and we’re going to miss him,” Horton said.

Officers had to remove him from the property. Corpening was arrested and taken from the scene in handcuffs by police investigators.

Update 12:55 p.m.: Victim is Steven Rosario, 18. Salisbury High, North Rowan High on code yellow lockdown. Spencer Police Chief Michael James says relatives of victim attend North Rowan. Officers are on the scene and report everything is fine at the school. Says the two principals talked and agreed it was best to have lockdown due to the shooting.

When officers arrived they found Steven Omari Rosario age 18, deceased on the living room floor. He had been shot. Several residents in the apartment complex stated they heard gunshots around 5:00-5:15 a.m. this morning but police were not called until 6:47 am. Mr. Rosario had been living at the residence for two weeks.

Anyone with information regarding this matter is encouraged to call the Salisbury Police Department at 704-638-5333 or Crime Stoppers at 1-866-639-5245. These calls can be made anonymously.

Update: The victim is a male teenager who had recently moved back to the area.

Salisbury Post reporter Shavonne Walker on the scene of a possible homicide in the 1000 block of South Fulton Street.

Little is known at this time, Victim likely a male.

By Shavonne Walker shavonne.walker@salisburypost.com A Spencer man with a history of weapons and drug offenses was charged Friday with being... read more