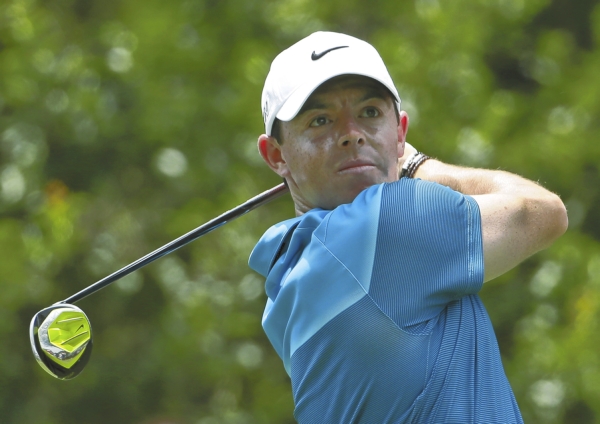 Rory McIlroy, of Northern Ireland, watches his tee shot on the third hole during the final round of the Wells Fargo Championship golf tournament at Quail Hollow Club in Charlotte, N.C., Sunday, May 17, 2015. (AP Photo/Chuck Burton)

CHARLOTTE — It wasn’t so much a final round as it was a victory lap on Sunday for Rory McIlroy. He cruised around the 7,500-yard course at the Quail Hollow Club en route to setting the tournament scoring record.

Late in the round and with the victory in hand, it was easy to see McIlroy was relaxed. He blasted his drive on the par-four 16th — the hardest hole in Sunday’s final round — 364 yards down the fairway. From the tee, he strutted his way down the fairway with his shoulders back, chest out, a bounce in his step and a touch of swagger.

It was the same after a punch out of the woods on the right side of the fairway on the last hole of the tournament. He was six shots ahead of Webb Simpson. The crowd was cheering. Victory was assured.

“I don’t feel like my game has ever been in better shape,” McIlroy said.

Simpson had the best chance of anybody to take down this year’s champion at the beginning of the day. Although, he knew he faced an uphill climb starting four shots in the hole.

“It’s tough. You never expect him to hit bad shots,” Simpson said. “So, it is a little difficult. It was fun to watch him play well. He’s our best player right now, and I wish more than anything I could have shot a couple under [par] on the front and made it more exciting. It just didn’t happen today.”

McIlroy, like he did at the U.S. Open in 2011 and the PGA Championship in 2012, left the field without a chance going into the final round. He won both tournaments by six and eight shots respectively.

For him, Sunday’s final round at the Wells Fargo Championship was boring. That comes from a lack of excitement down the stretch. It was a contrast to 2010 when he shot a final-round 62 — a course record he shared with Brandon de Jonge that stood till Saturday. His scorecard that day had six straight 3s starting on the 13th hole, and he finished four shots clear of the field.

This year’s stroll on the links was about finishing off a win.

“It was more controlled,” he said. “I feel like I’m a much more controlled player. As I said, I took command of the tournament (Saturday) and then I just needed to play a solid round of golf today.

“In Dubai at the start of the year, I went out with a three-shot lead. I shot a solid 70, got the job done.”

He shot a run-of-the-mill 69 on Sunday to claim his 11th career win.

What’s funny about all of this is McIlroy almost didn’t enter the tournament. A trip to Charlotte was never on his schedule.

He played two weeks ago in the WGC-Dell Match Play in San Francisco and last week at the Players Championship in Florida. He’ll be in England this week for the BMW PGA Championship. McIlroy’s place in the FedEx Cup standings after the Masters wasn’t where he wanted to be.

“I just said I need to play a little bit more, and I feel like I’m playing well,” he said. “So, it’s been in my mind that I wanted to play here. It was always in my mind I was going to play after that.”

Sunday’s victory, coupled with his win in California, moved him to third in the FedEx Cup standings.

It’s just one more thing to add to the pile of all he accomplished this week.

Wells Fargo: Thomas one to watch

CHARLOTTE — Saturday got off to an impressive start. Justin Thomas, a PGA Tour rookie, put on a show starting... read more