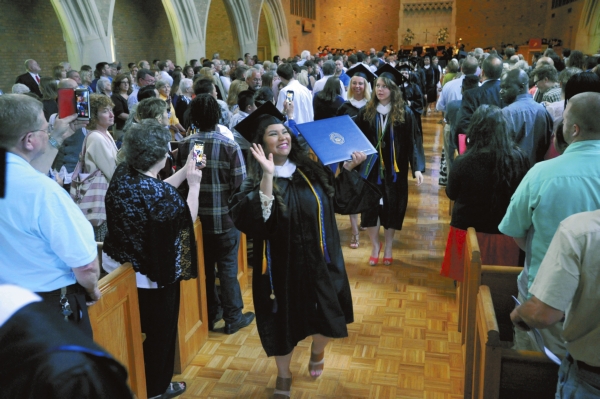 During the recessional from Catawba's chapel, this senior gives a wave and smile to her family in the balcony. photo by Wayne Hinshaw, for the Salisbury Post

SALISBURY — The Catawba College Class of 2015 said farewell to their alma mater Saturday and started the next chapter in their lives.

In an unexpected change, this year’s graduates received degrees in a total of three ceremonies held in the Omwake-Dearborn Chapel.

The unexpected change in plans had been made less than 24 hours earlier, when Catawba College officials found a hive of thousands of honeybees in the walls of the balcony inside Keppel Auditorium.

The three ceremonies were held to accommodate the family members of graduates. The Omwake-Dearborn Chapel seats less than half of the capacity of Keppel Auditorium.

Graduates lined up under the shade of pine trees near the campus library, and processed in through the chapel doors.

Catawba College President Brien Lewis told the Post that his staff, students and families had responded with patience to the last-minute change.

And, as the ceremony drew to a close, Lewis made a final remark to the audience – “No honeybees were harmed in the making of this commencement! — which drew laughter and applause from the crowd.

For graduates, the ceremony is a rite of passage that marks the start of something new and exciting, but some Catawba students said they’re sorry to leave friends and favorite professors behind.

“I’ll miss the students and the faculty, and being around such a wonderful and loving family,” Stoneberg said. At the same time, Stoneberg said she won’t miss the homework, or the essays.

“I’m just very excited and very proud to be graduating from such a wonderful school,” said Emma Stoneberg, of Asheville, who received her Bachelor of Science degree. “It’s overwhelming!”

Stoneberg is about to move to L.A. to work in a recording studio where she previously had an internship.

Theo Shepard, of Southport, said he knew Catawba was the right school for him. A native of California, he earned his B.A. in Communication with a minor in English, and plans to seek a career in public relations or marketing.

Shepard said he wasn’t always convinced Catawba was the right place for him. “When I was a freshman, I really thought of transferring,” Shepard said. “But I made some really great connections here, faculty as well as staff (and) friends that are going to be with me forever. I know this is where God brought me.”

Maggie Saunders, of Huntington, W. Va., said graduation was the culmination of her journey from high school to her future career.

“I still can’t believe it,” Saunders said. “And now it’s really here, it’s just crazy. I’m so excited, and so proud of myself and my friends. You know, we worked so hard.”

Now that she’s finished her degree, Saunders is going to work as an actress in Charleston, S.C.

At Saturday’s ceremonies, retiring Professor Dayna Anderson was recognized for her years of service, particularly her support of theatre students and her role as director.

The O.B. Michael Distinguished Alumnus Award was also presented to Chester A. “Junie” Michael III, a 1970 graduate of Catawba College.

Shepard and Sloan E. Kessler were presented with the Whitener Medals, which according to the college “are presented annually to the man and woman in the graduating class who combine … in the highest degree, the qualities of character, leadership and scholarship.”

Kessler, a native of Onalaska, Wis., received a bachelor of science degree in Sustainable Business and Community Development, with minors in Politics and Economics. She said she’s considering attending law school in the future.

Standing outside the chapel, Kessler said graduation was both bitter and sweet.

“Knowing that, come August, I won’t be coming back, is a sad thought,” Kessler said. “But it’s also exciting to know that life is going to be right around the corner. This is just another stepping stone for us, and I feel so prepared for what comes next.”