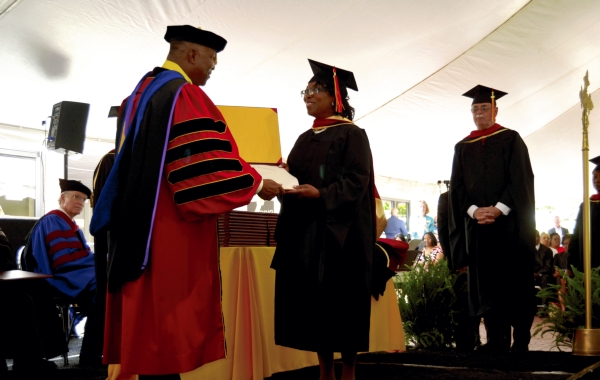 This year marked the 14th commencement ceremony at Hood Theological Seminary, which was held Saturday on campus. There were 58 graduates who received degrees/certifications. Shavonne Walker/Salisbury Post

On Saturday morning he walked across the stage where he received his master of divinity from the seminary during its 14th Commencement Ceremony. Foster was one of 58 graduates who walked under the large tent on the Mona Lisa Wallace Plaza in front of the Aymer Center.

He is the pastor of Pleasant Hill AME Zion Church in Wadesboro. He enrolled after “making excuses” not to perfect his spiritual walk, Foster said.

He came into the seminary program with a doctorate, Foster said, but he put it all aside.

Foster said he hadn’t devoted the same amount of time to his spiritual walk as he’d done with obtaining his bachelor, masters and doctorate degrees.

“I decided to truly put God first,” he said.

“I learned how to think and feel from a scholarly, biblical perspective,” he said.

Foster loved the diversity of the student body and faculty, which include some of the top professors in the country, he said.

“The curriculum will stretch and challenge you. You have to be open to new things,” he said.

The road to the stage and a degree weren’t easy, Foster said, and there were times he wanted to quit.

“All of us have had times we wanted to quit,” he said of his fellow graduates, but they “stayed the course.”

He encouraged others who are “serious about the Christian faith” to attend seminary.

Attending seminary was a life-changing journey, one in which he’ll never be the same afterward, Foster said.

The two had a casual conversation about attending seminary school and Troncale being ordained.

“And she did it all while taking care of her mom and a son in high school, who graduated and moved to Spain,” she said.

As Troncale walked across the stage, Card whispered, “that’s my daughter.”

Troncale reached for her mother’s hand and the two embraced as she stepped off the stage and headed back to her seat.

“Whatever had to be done, she did it,” Card said.

She and her daughter are members of St. Bartholomew Episcopal Church in Pittsboro.

The couple started in January 2014 with ministry being a second “career” for them, Tracy said.

The two prayed about their decision and “it made sense to do it together,” she said.

Tracy said she found the experience both challenging and inspiring. Tracy said they also loved the diversity throughout the programs and with its faculty.

Keynote speaker Teresa Elaine Snorton began with the line “I’ve got shoes, you’ve got a shoes, all of God’s children got shoes,” from the Negro Spiritual “Going to Shout All Over God’s Heaven.”

She used the song reference as a way to encourage graduates to not put on their shoes, but to take them off as well as to never become too important doing the “ordinary” task of ministry.

She said taking off shoes in many cultures is a sign of respect, a way to relax and provide relief of tired feet. But she told the graduates to take off their shoes “because God is here. He is worthy of our praise, worthy of our veneration and of our awe.”

“I want to remind you your task is to be ordinary, do ordinary things, make room for God to show up and do the extraordinary,” Snorton said.

The ministry in which the graduates will serve is a privilege, not an entitlement to serve, she said.

“When you take off your shoes you are vulnerable. God is calling for complete trust and surrender,” Snorton said.

By Shavonne Walker shavonne.walker@salisburypost.com Despite the bright sun, Karma Wilson sat flanked between her husband and mother, Nancy Perry, between... read more