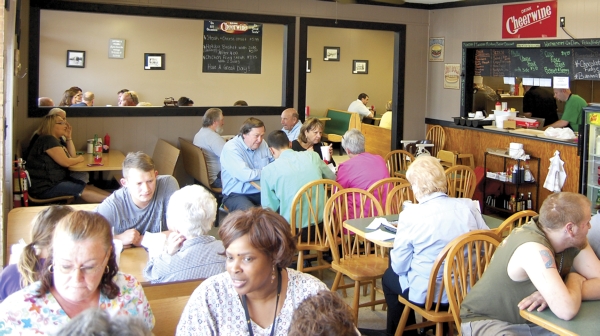 A large crowd fills up on food during lunchtime at Wahoo's Diner in Granite Quarry Thursday. The business opened last September with one waitress, Jamie Vanhoy, and one chef, Brandon Hendrix. Since then, the business has added space and hired two cooks and five waiters. David Purtell/Salisbury Post

GRANITE QUARRY — The lunch crowd filled most of the seats inside Wahoo’s Diner during the early afternoon Thursday. Friends, family and co-workers enjoyed everything from grilled pimento-cheese sandwiches to hot dogs and, of course, French fries.

“Best French fries ever!” Tiffany Shoe said, leaving no doubt she meant it.

Tiffany was with three other ladies who work at the new Novant Health office across the street from the Brinkley Center where Wahoo’s is. The women come to Wahoo’s at least once a week for lunch — Thursday was their second visit this week.

They all agreed the pimento cheese is one of their favorites.

“Sometimes we’ll place an order and pick it up,” Debbie Clary said, adding that the diner stays busy.

Wahoo’s opened in early September last year. Co-owners Jamie Vanhoy and Brandon Hendrix partnered to start their own restaurant — the two have decades of restaurant experience between them. At first, it was just Brandon cooking in the kitchen and Jamie waiting tables. But the restaurant has gained a following in its first eight months. More space and seating were added in February. And two cooks, along with four waiters — a fifth will start this summer — have been hired.

“Blessed,” is how Jamie described it.

After waiting tables since she was 14, Jamie, who turns 27 soon and has a young daughter, was urged by her family to go into business for herself. She had worked with Brandon at BeBop’s Diner and asked if he’d be her chef. Brandon, a 40-year-old, experienced cook who has helped start other restaurants, decided to give it a shot.

Asked how the first eight months have gone, Brandon said it has been “stressful” at times but also fun and that he’s enjoying it. Having worked at new restaurants before, he said he knew there would be ups and downs, but that he didn’t expect to have this kind of success this soon.

“Far exceeded my expectations,” he said.

He thought it would be a year before they had to hire more help and possibly add more seating, but it only took six months. In late February, a wall in the restaurant was removed to add another room for dining and the number of seats increased from 34 to 66.

The first day the new dining area opened, it filled up.

One of the new cooks is Jamie’s fiancé, Rocky Vickers, who left this job at the Carolina Beverage Group to get back into the restaurant business. He once had his own restaurant, too. It was called Rock’s Diner in Salisbury.

Rocky, 32, had been helping out in the kitchen at Wahoo’s on Saturdays until Jamie and Brandon asked him to come on full time. He was hoping they would ask, he said.

As for the wedding date, Rocky said, “I’m just waiting on her to tell me where to show up and when.”

The other cook is James Kesler, who started at Wahoo’s about a month ago. He’s been cooking for 20 years and has known Brandon for quite a while.

“I love this place,” he said about Wahoo’s, adding the team works well together.

Nicole Parker came on in late February as a full-time waitress — the others are part time.

Vanhoy linked the diner’s success so far to quality service and good food. Brandon said they’ve been told by customers that a place like Wahoo’s is what Granite Quarry needed.

Though Wahoo’s has had a good start, Jamie said there are always obstacles to overcome.

“It’s about finding solutions to problems,” she said about owning a business. And then there’s the long hours, early mornings and late nights that come with it. The diner is now open from 6 a.m. to 8 p.m during weekdays.

“Even when we’re not here, there is always something to do” regarding the restaurant, she said.

When problems arise, Jamie said she and Brandon are able to “talk it out and work it out.” The co-owners have different points of view but are able to meet in the middle and compromise, she said.

Jamie said there’s always more goals to set, but that she’s happy with where they’re at now.

When Wahoo’s first opened, Jamie put signs with motivational quotes on the walls. The signs are still there.

One reads: Anything is possible if you have the courage to make it happen.

“It’s all worth it in the end,” Jamie said

Friday was a very special day for Rowan-Cabarrus Community College’s 1,251 graduates as they received their well-deserved degrees and certificates.... read more