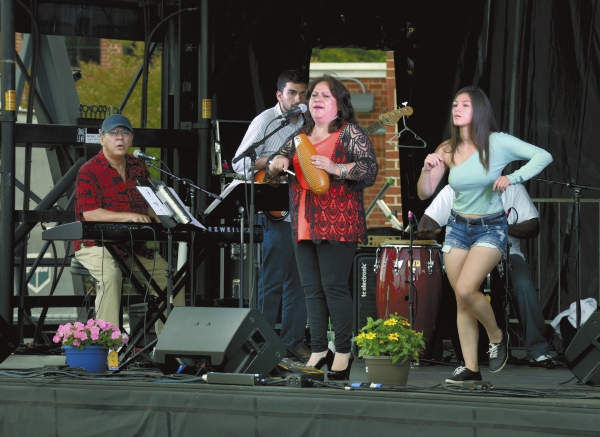 The West End Mambo Latin Jazz Band at the 16th Annual Blues and Jazz Festival as darkness settles on the festival. photo by Wayne Hinshaw, for the Salisbury Post

Despite the bright sun, Karma Wilson sat flanked between her husband and mother, Nancy Perry, between the main stage and VIP tent at the 16th annual Rowan Blues and Jazz Festival, which was held in a new location this year.

The trio parked their camping chairs where they could get a perfect view as Beverly “Guitar” Watkins took the stage. This year’s location was in a parking lot at the corner of North Lee and East Kerr streets, and held in the spring instead of the fall.

Wilson traveled from Boone with her husband and said they regularly attend festivals in and around their area. They enjoy and have seen Watkins perform at festivals including the Todd New River Festival in Ashe County.

“We are definitely a fan of hers,” Wilson said.

Perry, of Gold Hill, said it was her first year at the festival. The three attended a wedding earlier and tried to figure out what to do afterward.

“We thought this would be nice,” Perry said.

Ernest Magazine has been attending the festival since the beginning. The Rowan County native said he enjoys the festival.

Richard Godfrey attended with his 2-year-old daughter and 7-year-old son on a whim. The family has attended the blues and jazz festival in Charlotte.

“We were just riding by and heard it,” Godfrey said.

The Rowan County resident said he spent the whole day with his children. They went fishing, played a little basketball and stopped when they heard the music.

Amy and Charles Haynie walked to the event with their 6-year-old daughter, Ella, from the Fulton Heights neighborhood. The family said they heard about the event through a flyer and from a neighbor.

“It’s great. We like that it’s down here and showcases this part of downtown,” Charles said.

They try to attend events that are family oriented like this, the couple said.

This year’s acts included Watkins, 76, of Atlanta, who just released a new CD titled,” Back in Business.” West End Mambo, which was founded in 1999 and based in Winston-Salem, is made up of musicians from the Caribbean, North, South and Central America.

Peter Harper, who also performed, is a multi-award-winning, Australian-born singer and songwriter as well as festival regular, the Joe Robinson Revue.

The early crowd wasn’t as big as in years past, said event organizer and founder Eleanor Qadirah.

Qadirah said there were other events going on around the same time and she believes the heat deterred some people from the attending.