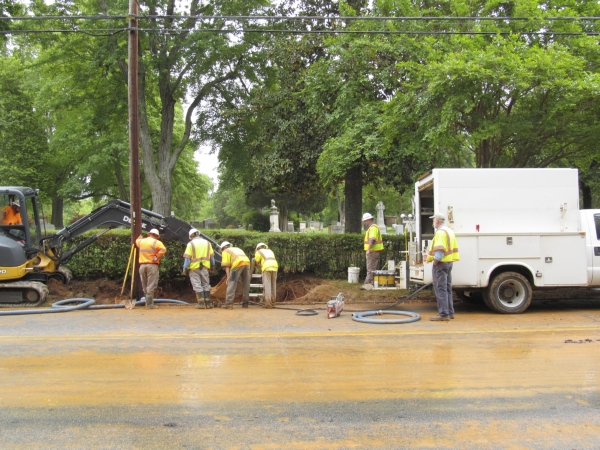 City employees work to repair a broken water main on South Fulton Street in the early hours of Mother’s Day.

I was awakened at 6 something on Mother’s Day morning by the unmistakable beeping of what I knew to be a commercial vehicle backing up, seemingly, in my own front yard.

Upon investigation I found an intrepid crew of city Water Department personnel repairing a broken water main. With nothing better to do, my wife and I fixed coffee and repaired to our front porch to watch the goings on.

The repair crew was diligently digging out around the broken pipe and clearing away the resulting detritus, while the street cleaning crew were beginning the eradication of the acres (or so it seemed) of mud covering Fulton Street.

It was at this time I noticed the skill of these individuals. The driver was maneuvering his massive street sweeper through the mud and between parked cars like a racecar driver. I remarked to my wife that he reminded me of watching the Funny Car drivers at the drag strip back up after a burnout. Though his truck had to move forward slowly to pick up the mud, he wasted no time backing up and very skilfully avoided contact with any other object.

It occurred to me that we have some very talented people working on our behalf in Salisbury. So many times we wrestle over budgets and whether to do this or that, but we need to stop and take stock of the people who take care of us.

This water main broke around 3:30 in the morning on Mother’s Day. These people rolled out and were on the scene to repair and contain this mess in no time. The Water Department must be ready to deal with underground utility problems occurring to systems that may have been in the ground for 100 years or 2 years. The systems are all different and they have to have the right clamps, patches and piping on hand to fix any those problems.

More than that, they have to be able to tap the expertise to effectively solve these interruptions on the first try. The backhoe operator has to dig out mud to permit access to the damage without undermining the utility pole that is within feet of the break. The hole has to be big enough to allow some very talented people to get into the hole and cut the pipe to receive the new section and clamps that will keep it in service for many years.  No temporary fixes here.

Meanwhile, the street cleaners are working hard to get the tons of red clay off the street and sidewalk and some of the yards. It must have been a real geyser before the flow was shut off.

In the midst of this, we have those who feel they are more blessed among men and want to drive through the area even though the barricades are up.

One such vehicle played chicken with one of the cleaning trucks, forcing it to back up several hundred feet so the driver could get through. Amazing.

But all was taken in stride and the professionals of our Water Department simply did what they were there to do — get the water flowing again and the streets reopened.

My hat is off to those individuals who get called out in the middle of the night to do the messy work of making sure clean water flows to our homes every time we turn on the tap.