Bucket List Girls inspire each other with ‘purposeful fun’ 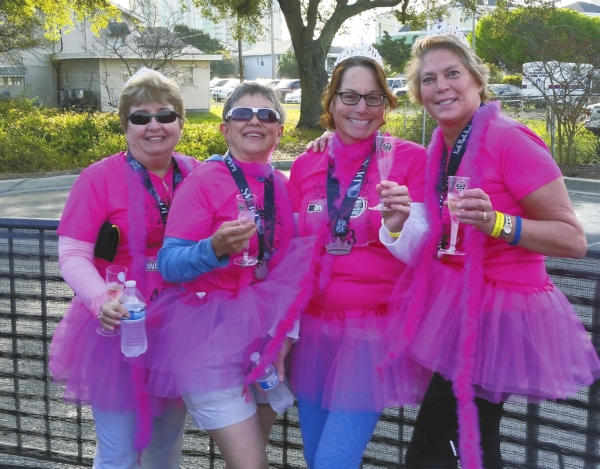 SALISBURY — The founding of the “Bucket List Girls” probably started with Susan Linza. She wanted to go water-skiing one more time, and good friend Stacy Erb and her husband, Mike, offered up their ski boat — and patience.

Linza successfully completed her mission, and having Stacy join her in the water adventure, made it that much better.

Well, it started something. Linza, Erb and Clarissa Robinson — sometimes joined by Ruth Orsino — began doing things together that were more ambitious than their normal routines.

Last spring, they hiked a portion of the Appalachian Trail, climbing up a fire tower at the end to enjoy a magnificent view of the mountains. Just recently, they chartered a boat and spent a day reeling in catfish from a Santee Cooper River canal.

They participated in the Divas 5k Run to fight breast cancer in North Myrtle Beach, S.C., and rode an Amtrak train to Raleigh, where they each steered a Segway on a historical tour of the city.

On a trip to the U.S. National Whitewater Center in Charlotte, they navigated the many rapids and also flew tower to tower through the air on a zip line.

Over time, the women started calling themselves the Bucket List Girls.

Their adventures are things they are happy to take on before they die, but more important, they enjoy doing them together.

“It just takes a little more thought to have purposeful fun,” Robinson says, “but the reward is sweet.”

“For girls, it’s something you have to have,” Erb says. “It enriches your life so much.”

Linza thinks what the women are doing is a bit inspirational, too.

“Quit being a couch potato and do something,” Linza says. “Go out and have some fun. Life is too short.”

The Bucket List Girls also have found ways to combine their fun with good causes. Linza uses the Divas 5k Run as an example. While the walkers and runners are wearing pink boas and tutus as they participate — and sipping glasses of champagne when they finish — they’re also raising money and awareness in the fight against breast cancer.

“It was the first thing where we felt like we contributed something worthwhile outside of us having fun,” Linza says. “It was a first-class event.”

Linza already is thinking big for next year’s Divas Race. Through Wayne Mullis Travel, she is trying to organize a busload of 52 women from this area to travel to North Myrtle Beach for the race and the fun that goes with it. She already has 20 people on board.

The women stress their adventures aren’t designed as anti-husband trips, but things their husbands usually don’t want to do anyway. How many men want to run like divas, for example.

The women are in their 50s and 60s and also at the point in their lives where they are older, wiser and have the financial means to do this stuff together, Robinson says.

Linza says their various excursions really aren’t that expensive because they often can divvy up some of the costs, especially lodging if that comes into play.

Erb suggested the fishing excursion and staying overnight in a S.C. fish camp. “It wasn’t the Hilton, or anything like that,” Erb says, but she loved when the non-experienced Robinson told her, “You know, this fishing stuff is kinda relaxing.”

Robinson says her husband and their three sons already did the fish camp thing in years past, when she was happy to send them on their way without her. But now that she’s older and able to do it with friends, casting for catfish and staying overnight in pretty primitive lodging seemed a bit more exciting, Robinson says.

“It’s sweeter with girls, it really is,” she adds.

On their river adventure, Robinson ended up landing the first catfish of the day, then the biggest. Robinson laughs because, except for Erb, “we were fish out of water.”

Robinson particularly enjoyed their hiking trip in the mountains because “of the sense of sisterhood and that all three of us wanted the same goal.”

“The view was awesome, kind of exhilarating,” Robinson says.

Erb has been fighting Parkinson’s disease for 16 years, and a recent operation for deep brain stimulation was highly successful for her — so much so that Linza and Robinson don’t give her Parkinson’s a thought when they plan the next trip.

Ideas for the next bucket list item often are hatched as the women are returning home from the latest exploit. In the near future, Linza wants to take the Bucket List Girls to her hometown of Pittsburgh, Pa., and show them all the sights.

Having successfully completed a 5k race, the women also have talked about participating in a half-marathon.

“I can’t wait to see what we do after Susan retires from the VA,” says Robinson, who along with Erb already is retired. “I have a lot of expectations, but if it ended tomorrow, it’s still been a sweet ride.”