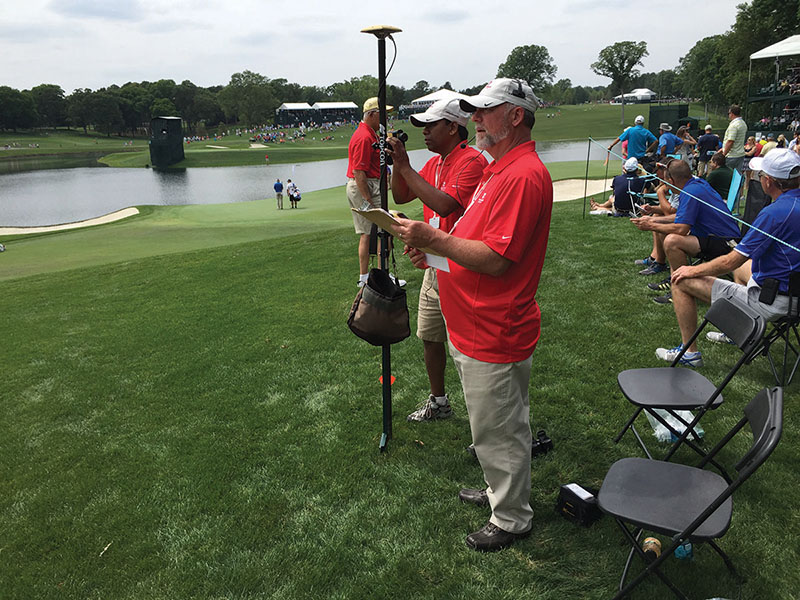 ADAM HOUSTON / SALISBURY POST Scott Luther, a China Grove resident, mans his post at the Shotlink station Thursday on the 14th hole at Quail Hollow Club during the first round of the Wells Fargo Championship. He is one of 2,300 volunteers working this week during the golf tournament.

CHARLOTTE — The office for Scott Luther on Thursday and Friday had the most spectacular view in all of the Queen City. Luther’s domain was the fairway of the 14th hole at Quail Hollow Club for the first two rounds of the Wells Fargo Championship.

He had a view across the lake of the heart of the course’s famous Green Mile.

Within his sight is also the famous par-three 17th and maybe a glimmer of action on the tee at the 18th finishing hole.

The China Grove resident is among the 2,300 volunteers performing a various number of jobs around the course. There’s hole marshals, hole captains, standard bearers and many other positions among them. You won’t find their names on the screen or in print, and they don’t do it for the money. Instead they do it because they love the game and want to be near the action.

Not all of the volunteers are from Charlotte. There is a group of Salisbury and Rowan County residents doing their part this week.

Luther works in laser operations, which relays the distance of tee shots to the PGA Tour’s Shotlink program. Cliff Sorel, like Luther, has been a volunteer for every year of the tournament. Maurice and Denise Lyerly’s manned the tee at the par-four 12th, maybe the farthest point from the clubhouse on the course.

Saturday was the Lyerlys’ first day of their first year working the tournament. That makes it like the first day of school.

It was easy to see they were loving every second of it. The sun was shining. The golf was good, especially later in the day when tournament leader Rory McIlroy rolled through.

Denise was in charge of crowd control, making sure everyone stayed still and quiet while the professionals hit their tee shots. Maurice, her husband, signaled to marshals lining the fairway which way the ball traveled in an attempt to keep fans safe from wayward tee shots.

The Lyerlys attended the tournament four years straight starting in 2011. Soon after their first trip, they began looking into stepping inside the ropes. They knew exactly what they wanted to do.

“It took us three years, but we wanted to make sure we were marshals or something helping with the holes and not carrying signs or something like that,” Denise said.

Meanwhile, carrying signs, also known as a standard bearer, is precisely what Sorel wanted to do. The 13-year veteran has trekked around the course with his scoring sign for every year of the tournament. He didn’t want to be in a corporate tent. Instead he had his eye on a position in the middle of the action.

“It’s fun, especially if you’ve got a group that are really popular players,” Sorel said. “To be right next to them and be a part of that energy and buzz, it’s fun to be literally five feet from them when they are hitting 300-yard drives.”

He’s walked the course with run-of-the-mill guys on tour, although every now and then he gets a big name. He toted the board for John Daly’s group one year and did the same for Mickelson during a pro-am in another. Sorel even got a signed ball, a signed hat and a photo with the man who is one U.S. Open win shy of a career grand slam.

All of that is framed in a shadowbox in his office.

The days for volunteers are long. Luther left home around 5 a.m. Thursday to be at the course around 6:30 a.m. His days didn’t end until the last group rolled through.

“It’s a long day, especially if you are standing out in the sun,” he said. “It’s not an easy gig. You just have to love golf.”

The closest he may come to a souvenir from a player is likely an errant tee shot tracking toward his spot on the 14th.
If that happens, he and his partner Anaad Rayan had a simple procedure.