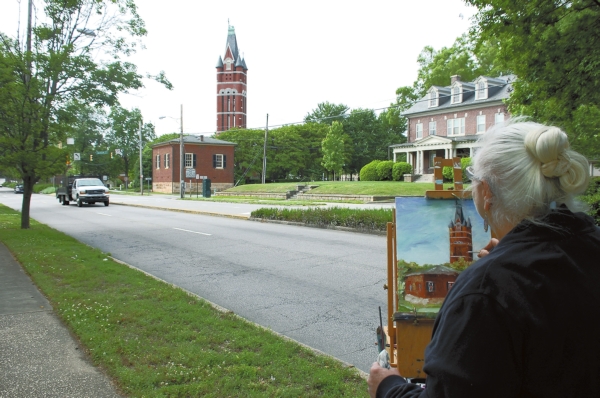 Mark Wineka/Salisbury Post Cathy Matthews was one of the plein air artists on location Thursday morning during the Waterworks Visual Arts Center's breakfast. She was painting the Bell Tower from a vantage point on West Innes Street.

Thursday dawned clear and pleasantly cool — a perfect morning to Wake Up with Waterworks.

The third-annual breakfast fundraiser for the arts organization took place at the Trolley Barn. This year, local artists worked indoors and outdoors as the event took place, creating a variety of artwork.

Traci Williams, president of the Waterworks board of directors, said that Waterworks was the only teaching museum within 40 miles of Salisbury, with four rotating annual exhibits.

Wake Up with Waterworks is one of three fundraisers each year the organization undertakes, which include The Big Chili Cook-off and the Oyster Roast.

Williams got interested in Waterworks through signing up daughter Courtney, now 10, for Messy Art when the girl was younger. After attending the oyster roast, she said, she was hooked.

“We want to take Waterworks from great to grand,” she said.

Through the magic of technology, Mike Shue of Virtual Sounds talked with the Plein Air artists working a few blocks away — their images shown on two large screens.

Matthews said that Waterworks had provided support to Plein Air Carolina, and that she’d had the opportunity to learn from other artists through exhibitions. Matthews showed off a lovely painting of the Bell Tower, garnering audience applause back at the Trolley Barn.

Moore’s answer was drowned out by a passing train, but Shue relayed that the artist liked the fact that the organization brings artists of all ages together.

Steimel was so intent on her work that she never turned around to speak to Shue.

City Councilwoman Karen Alexander said that she always knew that art was essential to the human experience. The owner of KKA Architecture said that she was able to develop as an architect for her vocation and as a visual artist for her avocation.

Art, she said, provided the foundation for the rest of her education.

David Faber, professor of art and department head of printmaking at Wake Forest University, likened the creative process to the birth process.

“We were all created,” he said. “We went through this process.”

Mark Riley is the fine arts chair at Jesse Carson High School. He said that he benefitted from art therapy after his military service. Although he didn’t know what Waterworks was when he came to the area, he quickly learned, he said.

As an art instructor, he has watched countless students develop a passion for art. That included Sarah, a young girl who came to him dressed in black with black hair and black make-up, her wrists wrapped in bandages because of multiple suicide attempts.

In time, her art and her attitude started to brighten.

“She discovered her own value,” Riley said. “She was a gifted young lady.”

Waterworks, Riley said, is a place that recognizes the value of people in our community. “It’s a place that makes a difference, in my life and in the lives of my students.”