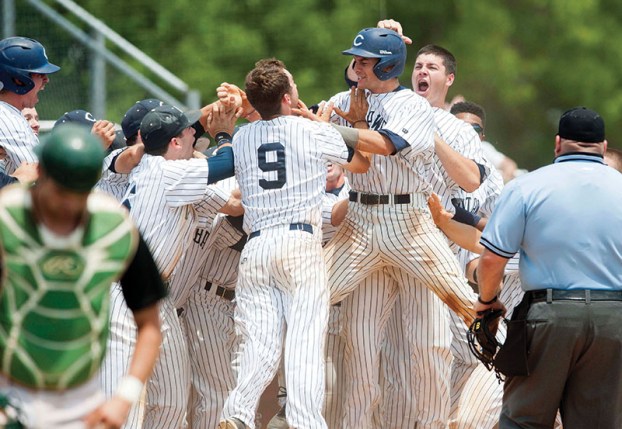 THOMASVILLE — The second-best thing about Catawba slugger Will Albertson is that he’s in scoring position when he steps in the batter’s box.

The best thing about Albertson is he’s a modest hero. Albertson’s two-run walk-off home run soared over the left-field fence and a light pole and propelled Catawba into Sunday’s 1 p.m. regional championship game The soft-spoken catcher, however, pointed at left-hander Russ Weiker as the reason for the Indians’ epic 7-6 victory over nemesis Mount Olive at Finch Field.

“Definitely, hats off to Russ for this one,” Albertson said. “He just kept putting zeroes on the board and he kept a really good-hitting team down for a long time. They didn’t have much hard contact at all against him.”

Catawba dug a hole in Saturday’s early game while fans were still settling in their seats. Joe Koehler’s two-run double gave Mount Olive (39-15) a 3-0 lead and knocked out Catawba starter Connor Johnson. Weiker relieved Johnson, and after Brett Lang’s single made it 4-0, Weiker got the Indians out of an ugly first  inning.

“We had a poor start ,” Catawba coach Jim Gantt said. “But Russ came in and handled the situation well. He’s pitched in state championships (for South Stanly). He’s been there before. He was the bridge to us having a chance to chip away and come back.”

Albertson just missed a three-run homer — barely foul down the left-field line — but his single helped the Indians score two runs in the first. T.J. Wharton got a run home with an infield hit. Dylan Richardson made it 4-2 when he grounded into a fielder’s choice.

Then Weiker went to work. His allies were his changeup and slider, and he struck out seven. He came in the game much earlier than he’d anticipated, but he carved up a powerful lineup that includes four lefty hitters.

“I didn’t have any trouble getting loose,” Weiker said. “The biggest thing was getting into the mindset to compete.”

Blake Houston bounced a two-out single through the the left side in the fourth to cut Catawba’s deficit to 4-3.

Kyle Smith lashed a two-out hit in the fifth to tie the game 4-all against Mount Olive starter Kodi Whitley, who lasted into the seventh inning.

When Catawba right fielder Luke Setzer couldn’t make a diving catch, Mount Olive’s Tyler Farmer had a leadoff double in the seventh. He scored when Jason Morozowski bounced  into a fielder’s choice on the last pitch Weiker threw.

Freshman lefty Michael Elwell got a strikeout to end the top of the seventh. Craig Brooks’ two-out RBI single in the bottom of the inning got the Indians even at 5-all.

Elwell was untouchable in the eighth, but a leadoff walk hurt him in the ninth. Kilgore Gailmard smacked a go-ahead double off reliever Ryan McClintock that sailed over the head of Catawba’s Austin Stilley. Stilley, trying to retreat, took a tumble on the bank in left field, and Catawba trailed 6-5 going to the bottom of the ninth.

It didn’t take long for Stilley to redeem himself. He led off the ninth for Catawba.

“After that play in left field, I was a little down in the dumps,” Stilley said. “But I cleared it out of my head. It was in the past, and I just wanted to have a good at-bat.”

He did. The lefty sent a double slicing down the left-field line against Mount Olive reliever Dario Santangelo. Speedy Emmitt Carden ran for Stilley.

That brought Albertson to the plate, and his day had been frustrating. He’d struck out, he’d popped up meekly, and he’d hit a routine grounder to the first baseman with the bases loaded.

“I’d had weak contact early in the count on a couple of at-bats,” Albertson said.

Albertson’s arrival at the plate led to a mound meeting. First base was open, but an intentional walk would put the winning run on base. The decision was made to pitch to Albertson, who led Division II in batting average coming into the regional.

“He missed with a fastball first pitch, so I was looking curveball second pitch, and he threw a fastball by me,” Albertson said.

Carden was bouncing around off second base and may have distracted Santagelo, whose 1-1 pitch didn’t get past Albertson.  It was up and over the plate, and Albertson launched it. The ball rocketed out of Finch Field in a hurry, and Catawba fans were dancing and hugging before the ball landed.

Albertson is batting .477 with school single-season records of 26 homers and 90 RBIs.

Catawba (43-13) avenged two regular-season losses to Mount Olive and is one win away from a regional championship and its second trip to the World Series. Catawba would have to lose twice Sunday to be denied, but Gantt takes nothing for granted.

“We were in the same position in the SAC Tournament, and we lost to Wingate twice,” he said. “That was demoralizing.”

CHARLOTTE — The office for Scott Luther on Thursday and Friday had the most spectacular view in all of the... read more