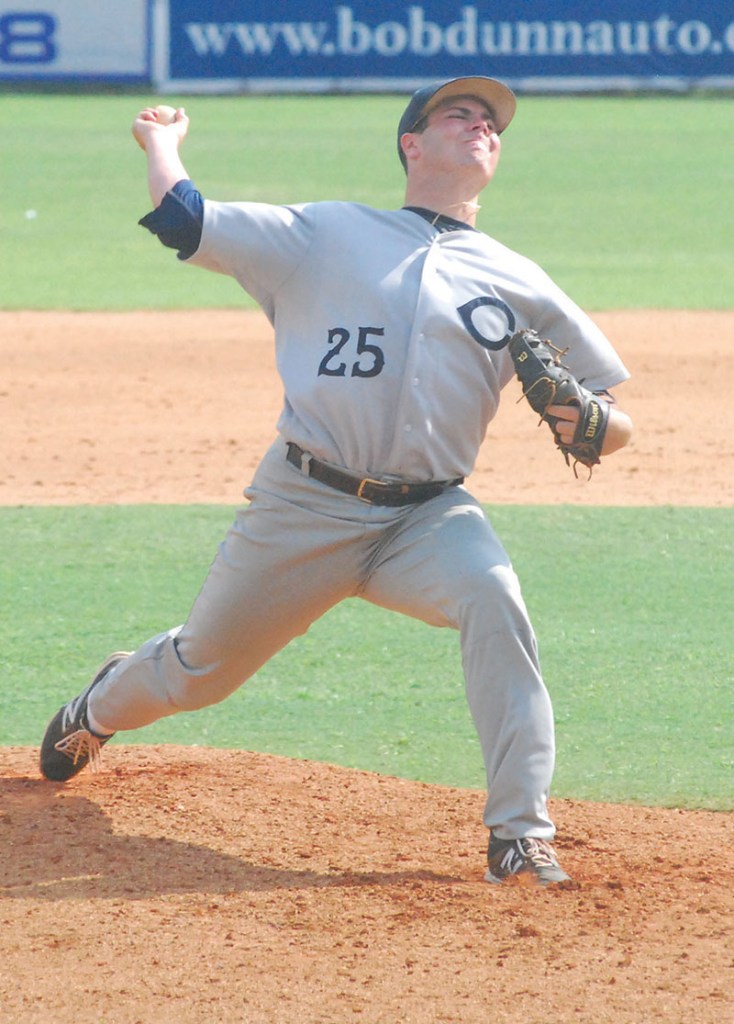 THOMASVILLE — The recipe for No. 1 Catawba’s 9-2 win Friday over No. 4 Georgia College, which as eliminated form the tournament, was a simple one.

Shaefer Shepard had a few threats, but he was in command for a solid eight innings. Luke Setzer made a diving catch in right field to end a threat in the bottom of the fourth. The Indians pieced together hits from top to bottom in their lineup.

With that, they advanced to the semifinals of the NCAA Division II Southeast Regional where they play No. 2 Mt. Olive at 11 a.m. Saturday. The winner of that game advances to Sunday’s championship, while the loser has to play Saturday evening to have a shot at making the championship series.

Shepard was a workhorse on the mound Friday for the Indians. He gave up a leadoff triple to Joseph Sandlin to lead off the bottom of the first inning. Shepard was able to retire the next three batters to prevent a run from scoring, and he was on point from there.

Shepard nine of the next 10 batters he faced after Sandlin’s triple. He had a troublesome fourth and fifth innings, but he was back in business, facing only 10 batters in the sixth, seventh and eighth.

“I just tried to spot up and use my secondary pitches well and just try to keep them off balance,” Shepard said. “My defense was behind me, which got me really comfortable.”

With Catawba leading 2-0 after the top of the fourth, Shepard got into a jam in the bottom half of the inning. Georgia College’s Clay Ardeeser drew a leadoff walk that was followed by back-to-back singles by Dylan Cook and Steve Hazel to load the bases.

Shepard struck out Logan Mattix for the first out. He induced an RBI groundout to third by Colton Montgomery for the second. The inning ended on a diving catch in right-center by Luke Setzer.

Setzer’s catch came at just the right time. It kept the Bobcats from potentially taking a lead and gave the Indians momentum going into the top of the fifth.

“I knew I had to make that play because Gantt is talking about a team effort, and I had to keep those runs from scoring,” Setzer said.

Shepard picked up his 10th win of the season. He definitely earned it after going eight innings, giving up just one earned run on six hits and four walks with eight strikeouts.

“It all starts and stops with Shaefer Shepard,” head coach Jim Gantt said. “He did a great job and gave us a chance until we could score a few runs. Then he kind of settled in and did what he does.”

Even with the leadoff triple and jam in the fourth, the thought of pulling Shepard from the game never existed.

“We knew they may score a few runs because they are a good-hitting team,” Gantt said. “He had to get into a couple of situations where he had to limit the damage because he is good enough to do that, and he did it.”

Relief pitchers Sean Grant and Michael Elwell pitched the bottom of the ninth to close out the win.

Catawba scored four runs in the top of the fifth to expand on its 2-1 lead and keep the game firmly within its grasp.

T.J. Wharton came around from second on Dylan Richardson’s single up the middle. Richardson moved to third on a wild pitch, and Craig Brooks’ sac fly to left field pushed the Indians’ lead to 4-1. Chance Bowden’s hard-hit double that reached the slight incline in left field allowed Austin Stilley to score for a 5-1 lead. Bowden scored from third on a wild pitch for a 6-1 Catawba advantage.

“Luckily we got some help there, but I thought the guys had some really good at-bats,” Gantt said. “They were able to grind out some at-bats and put the ball in play, and a lot of times if you do that, it will work out for you.”

The Bobcats got a run back in the bottom of the fifth to cut their deficit to 6-2, but it never got closer than that the rest of the way.

The lineup for Catawba was good all the way through Monday. Austin Stilley reached base in all four of his plate appearances — two hits, two walks — and scored two runs while batting in another. Stilley was one of four batters with two hits apiece.

The success was borne out of the Indians’ approach at the plate.

“I noticed we kept going deep in a lot of counts, and they kept throwing a lot of dirt balls,” Stilley said. “We didn’t chase much. I think we just kept a strong approach and let the ball get a little bit deep and hit the holes and worked hit and runs.”

Will Albertson led the Indians with three hits. His RBI double down the left-field line in the top of third gave the Indians their first run of the game. Setzer hit an RBI single up the middle in the fourth to make it a 2-0 game.

“It all starts and stops with Shaefer Shepard,” head coach Jim Gantt said. “He did a great