Keller Williams volunteers spend a day on the farm 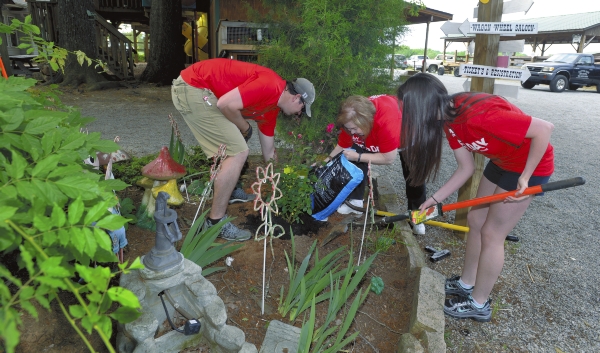 It was a happy day at Happy’s Farm as volunteers from a realty company came out to support the nonprofit farm that tutors and educates children.

Volunteers, wearing red T-shirts, from Keller Williams Realty, which has offices in Cabarrus and Rowan counties, did work at the farm as part of the annual Keller Williams RED Day. RED stands for renew, energize and donate.

Around 50 volunteers were there throughout the day.

Happy’s Farm, in southern Rowan County, is operated by Rhonda Stirewalt and is dedicated to giving children a place to have fun and learn. Stirewalt teaches math at Erwin Middle School. The farm, named after her great-grandfather, William “Happy” Trexler, provides after-school tutoring and summer camps.

Volunteers built box gardens, landscaped and painted. They even pulled weeds. They cleaned the horse corral and built an old-fashioned country storefront.

Amber Lube, a broker with Keller Williams in Kannapolis, organized the event.

“She does a good thing for kids,” she said about Stirewalt.

“I like to give back,” Lube said about why she volunteers. She said $600 worth of animal feed and supplies would be donated to the farm.

Stirewalt said the volunteers were “a blessing.”

“Hard to put into words what it means,” Stirewalt said, adding it says a lot about the type of people who live in the community.

All of the projects the volunteers were doing in one day would take her weeks, she said. Stirewalt, a single mother, runs the farm along with her daughter, Suzanna.

“The biggest thing for me is that you all didn’t know me, but you believed in me.” she said about the volunteers.

Miriam Ramirez, a sales broker, was pulling weeds while horses played in a nearby field. She volunteers at Capstone Recovery Center, a transition center for women, in Salisbury. Keller Williams did work there in 2013.

“I participate and forget about everything else today,” she said.

Jonathan Lowe and his father, along with other volunteers, were installing some wood edging in the ground. Lowe, who will be a senior at Liberty University in the fall, said he knows Stirewalt and her daughter. He went to Erwin Middle School. His father, Kelley, works for Keller Williams. His mother, Wendy, was helping to paint the “Hamster Shack” not far away.

“Lots of fun,” Jonathan said about volunteering on RED day, “This is great.”

“Intern” for the day is how his father, hammering a nail through a piece of wood, described his son’s role.

Rowan County Board of Commissioners Chairman Greg Edds stopped by to thank everyone for their hard work.

“Volunteerism is the soul and heart of our community,” Edds said while everyone was gathered on the farmhouse patio. Two farm cats watched and wondered what all the activity was about.

Lube’s father, Bruce, and her brother, Jasen, were building the box gardens, four in all. Two will be raised up higher than normal so children in wheelchairs can use them.

Being bossed around by his daughter for the day is kind of fun, Bruce said. And it’s also fun to help the community, he said.

Toward the rear of the farm, a group of men, led by Jerry Bentley of Bentley Construction, worked to get a piece of wood level as it rested on two log posts — the sign for the old general store. Children will be able to paint the storefront on the wooden fence behind the sign.

“The photographer taking pictures doesn’t see the wings on their shoulders, but I do,” Stirewalt said about the volunteers.