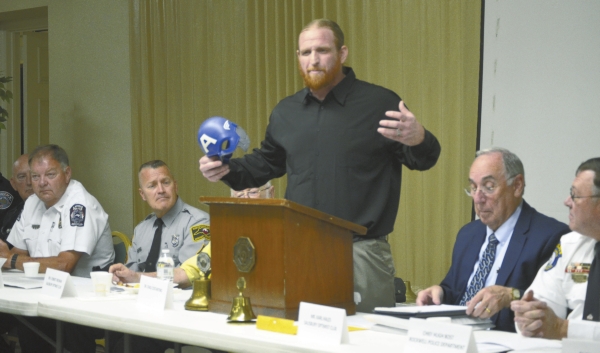 Dr. Chad Costantino, of Abundant Life Christian Center, was the guest speaker during the Respect for Law breakfast where he spoke about the "true heroes" who go above and beyond their call to make a difference in the communities they serve. Shavonne Walker/Salisbury Post

Law enforcement — it’s often a thankless job and at times one with few accolades. However, that all changed Thursday morning as a room full of law enforcement officers, their families and friends gathered to say thank you during the annual Respect for Law breakfast.

The breakfast this year was sponsored by the Salisbury Optimist and Salisbury Lions clubs. It was held at First Baptist Church of Salisbury.

Dr. Chad Costantino delivered a speech that held a mix of laughter and appreciation for the men and women who do their best to make the community safe.

He said he counsels youth, some of whom have discovered superheroes like the ones in the movies aren’t real, but he tells them about law enforcement, who he said are the real superheroes.

Costantino, of Abundant Life Christian Center, compared law enforcement officers to superheroes. He told the crowd about law enforcement using the acronym superhero. S – serve others, U – unites others, P – prepared for battle, E – encourage others to not lose hope, R – restores order, H – humbled by putting others before self, E – exposes the darkness, R – risk their lives to protect others, O – overcome evil with good.

• China Grove Police, Officer Dustyn Swartz. He is a 2008 South Rowan graduate and University of North Carolina at Charlotte graduate. He began with the China Grove Police Department in 2013. Prior to joining China Grove, Swartz was a detention center officer with the Rowan County Sheriff’s Office. He provided Christmas gifts for a store clerk who said it wouldn’t be a great holiday for her family.

• East Spencer Police, Officer Aaron Deaton. Acting Chief Sharon Hovis said Deaton is a dependable, respectable and loyal officer who can be called upon day or night to work. “He’s a hard worker,” she said.

• Granite Quarry-Faith Joint Police Authority, Officer Greg McKinney. McKinney matches the values of the department, said Chief Mark Cook, which include good customer service, good ethical conduct and someone who is beyond reproach and professional.

• Kannapolis Police, Officer Jennifer Mackey. She began with the department in 2009 as a patrol officer and now is a school resource officer for Kannapolis Intermediate School. She is a member of the department’s honor guard and is a police officer level II.

•  Landis Police, Detective Shane Safrit. Safrit began as a patrol officer until he was promoted in 2013 to detective, during which time he got married and obtained a degree. He shows compassion and is well liked and respected by his peers, said Chief Bob Wood.

• N.C. Highway Patrol, Trooper H.T. Sloop. He is an East Rowan graduate and a 2003 graduate of Appalachian State University, where he double majored in finance and bank risk insurance. He spent his first two years in Iredell County.

• Rockwell Police, Officer Jerry Beaver. Beaver works part time with both Rockwell and the Rowan County Sheriff’s Office. He worked for the city as a civilian until he retired and received his basic law enforcement training certification in 2009. He began as a patrol officer and moved to the detention center with the sheriff’s office. Beaver has continued in the patrol division.

• Salisbury Police, Cpl. Shane Hill. He joined the department three years ago after serving 11 years with the Kernersville Police Department. He was originally assigned to the day shift patrol division and asked to be placed on night shift. He wanted more, said Chief Rory Collins. He is now part of the street crimes unit. He also helps train new officers.

• Spencer Police, Investigator Nicholas Pacilio. He is part of the Internet Crimes Task Force, has a degree in criminal justice technology and is a Gang Resistance Education And Training (G.R.E.A.T.) instructor. Chief Michael James said he was instrumental in helping to solve two homicides and an armed robbery within the last year. He also bought toys for the child of one of the homicide victims, unbeknownst to any of his peers, James said.

• V.A. Medical Center, Capt. Joseph Amos. Amos is a former Army military police officer. He was nominated by his peers and even took over the K-9 program after the departure of the last officer who was in charge of the program, while still maintaining his duties in the patrol division.

This year’s recipient of the Paul G. Wilson Award is Chief Deputy Terry Clanton of the Kannapolis Police Department. Clanton said he had the opportunity to work with Wilson and was honored to accept the award, which he then dedicated to all of the law enforcement officers in Rowan County.

Salisbury Police Officer Ann Cooper, who was unable to attend, received the Youth Service Award. This year was the first time the award was presented, said Dr. Karl Hales, president of the Salisbury Optimist Club.

He said the Optimist Club’s motto is youth-focused and there’s no better way to recognize an officer than one who works directly with youth and makes an impact in young people’s lives.