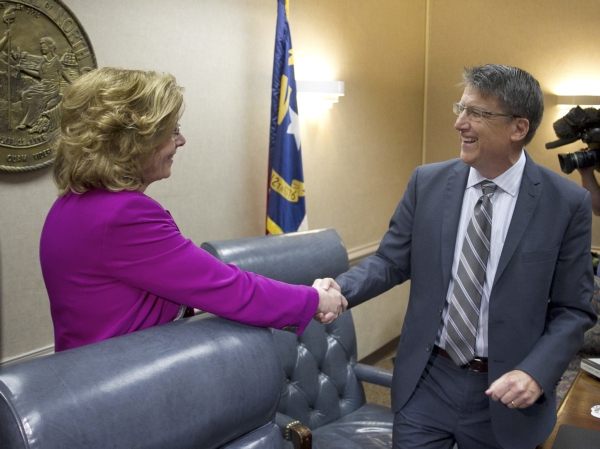 North Carolina Gov. Pat McCrory shakes hands with Raleigh mayor Nancy McFarlane after the unanimous vote by the Council of State to sell 308 acres at the old Dorothea Dix site to the City of Raleigh for $52 million on Tuesday. AP photo

RALEIGH — Pat McCrory will likely run for reelection next year as governor of North Carolina against longtime Attorney General Roy Cooper. Both men are capable candidates who will run skillful, well-funded campaigns. Given the larger political context, I see the contest as unpredictable at the moment. But there are a couple of things we can say with confidence about it.

The first is that while North Carolinians care about many issues, they are mostly likely to judge McCrory’s performance as governor as it relates to the performance of the state’s economy. So by this time next year, I’ll be looking at such statistics as job gains and unemployment rates to gauge the incumbent’s prospects for reelection.

Now, voters aren’t fools. They know that their states aren’t walled off from the rest of the country and the world. As Fordham University political scientist Jeffrey Cohen and University of Wyoming political scientist James King established in a frequently cited study in the Journal of Politics, voters tend to credit or blame their governors not for the absolute performance of their economies but for the relative performance.

North Carolina is also outperforming the national and regional averages in job growth. Among our neighbors, only Georgia’s year-to-year rate of 3.1 percent through March exceeds our 2.8 percent rate.

The second thing one can say with confidence about the 2016 gubernatorial race is that McCrory’s position is unique for a North Carolina Republican. The only other GOP governor in a position to run for re-election, Jim Martin in 1988, served with a strongly Democratic legislature. This matters because, once again, voters aren’t fools. They tend to assess unified governments differently from divided ones.

That’s what a study published in Political Research Quarterly found. Examining gubernatorial elections in 43 states, Kevin Leyden of West Virginia University and Stephen Borrelli of the University of Alabama found that the relationship between state unemployment rates and the vote totals of incumbents or their would-be partisan successors was stronger when the same party also controlled the state legislature.

“Voters are more able and/or willing to reward or punish a political party when that party’s responsibility for government performance is complete,” the authors wrote.

What can’t be said with confidence about the McCrory-Cooper race is how much the national political environment will affect it. Obviously, gubernatorial candidates would rather be on a ticket with strong presidential or senatorial nominees. And if you track the rise of the Republican Party to parity with Democrats in North Carolina, it doesn’t look like a straight, upward-sloping line. It has inflection points. In each case — 1966, 1972, 1984, 1994, and 2010 — the GOP benefitted from either strong presidential candidates or midterm fatigue with Democratic presidents.

As for the 2016 U.S. Senate race, it doesn’t look at the moment like Richard Burr has drawn a strong Democratic challenger. If the race proves ho-hum, North Carolina Democrats will pour their hopes, dreams, and campaign cash into Cooper’s challenge to McCrory. Similarly, if state Republicans aren’t so worried about reelecting Burr, they’ll be free to focus on the governor’s race.

Today’s polls tell us nothing other than the McCrory-Cooper contest will be highly competitive. We already knew that. Over the next several months, watch North Carolina’s economic performance. It is actually the leading gubernatorial indicator.

Congratulations, college students in the Class of 2015. You were born at the right time. This is “Pomp and Circumstance”... read more