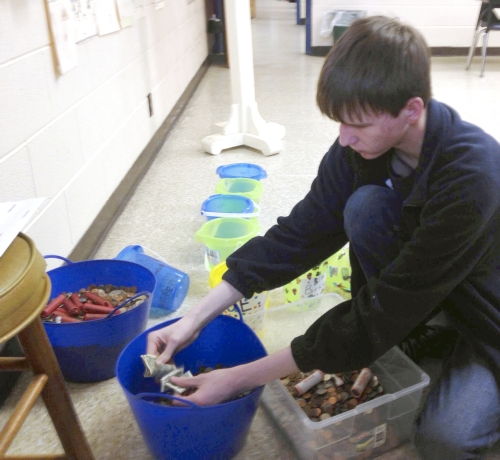 Students from all grades were excited and participated wholeheartedly, nearly doubling the amount collected last year. They raised $4,024.68.

A North Hills tradition, Pasta for Pennies is used to raise funds for the Leukemia and Lymphoma Society.

The school kicked off the collection week with a chapel service March 21, and then collected coins Wednesday through Friday of that week, ending with the final collection at Swing into Spring event on Saturday.

Because of their effort, the sixth grade class will be going to eat a pasta lunch provided by Olive Garden. The top class in elementary was Mrs. Hunt’s kindergarten, and they were given a special party of their own provided by the Junior Civitan club. Eleventh grade won in the high school competition and celebrated with doughnuts and soda.

Students even turned in coins from numerous other countries and territories outside of the U.S. including Canada, Mexico, Namibia, France, Cayman Islands, Singapore, Bahamas, Brazil and Europe. All of the money collected goes to the Leukemia and Lymphoma Society to aid in the search for a cure for cancer and provide medical help to those in need.