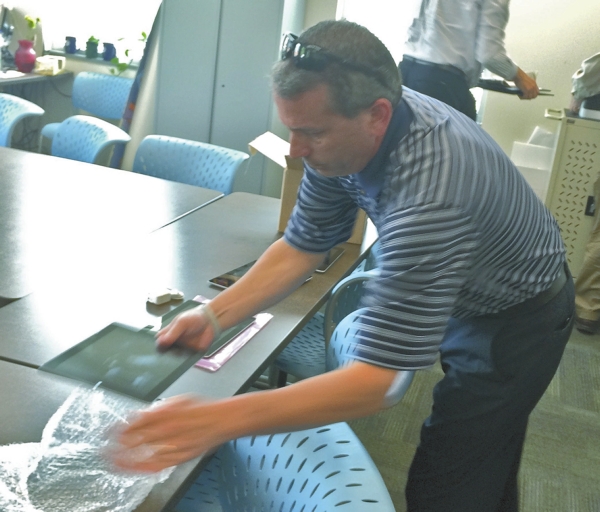 Laptops from Sacred Heart are an “answer to prayer”

In today’s society, computers are more than a luxury; they’re a way of life. Yet there are those, especially the homeless, who still don’t have access to one.

When Rowan Helping Ministries built its new building, they purchased a laptop cart, but they didn’t have any laptops to fill it.

It was “bought with a prayer somebody would come fill it for us,” said Rowan Helping Ministries Executive Director Kyna Grubb. “It was one of those faith purchases.”

This week, that laptop cart was filled with a little help from Sacred Heart Catholic School.

“Sacred Heart really was an answer to a prayer,” Grubb said.

Sacred Heart Principal Frank Cardelle and computer teacher Hugo Gareis brought the laptops, along with a few other surprises.

“There’s a combo of a lot of different things,” Cardelle said as he and Gareis unpacked everything they brought.

They donated 15 used laptops, four iPads and a wireless printer. An Apple TV to use for presentations along with the iPad is on its way, as well.

Some of the items, such as the laptops, were used and donated by members of the Sacred Heart parish.

“It’s a shame to just toss them when they can still be used,” said Kris Mueller, resource development assistant for Rowan Helping Ministries.

They began their campaign by advertising the need in the church bulletin on Sunday mornings, Cardelle said.

Gareis replaced the batteries in each of the donated laptops, and put a new hard drive in several that were in good physical condition.

Sacred Heart students chipped in by donating money to participate in monthly dress down days and ordering Chick-fil-A lunches.

That money was used to purchase the iPads, batteries and Apple TV.

This isn’t the first time Sacred Heart’s collected and donated laptops for those in need. Last year, Cardelle and several others flew to Ghana with similar gifts in to furnish a computer lab in a school.

Cardelle joked that this trip “is a lot shorter” than last year’s.

“My goal is to get our guests out of here quicker,” said Shelter Director Cyndi Honeycutt.

Shelter residents and community members will be offered computer classes where they can learn basic computer literacy and keyboarding, opening up jobs that weren’t accessible before.

Currently, computer classes are one-on-one and are conducted on a volunteer’s laptop, or residents go to Rowan-Cabarrus Community College. Now, more people can participate.

“We also have folks who need the ability to apply for jobs,” Grubb said.

“I’d like to save some steps,” Honeycutt said, adding that she’ll be able to give out fewer bus tickets if residents have the ability to do what they need to do online.

By Shavonne Walker shavonne.walker@salisburypost.com Olivia Kilgo moved into her Morlan Park Apartment five months ago with intentions to make it... read more