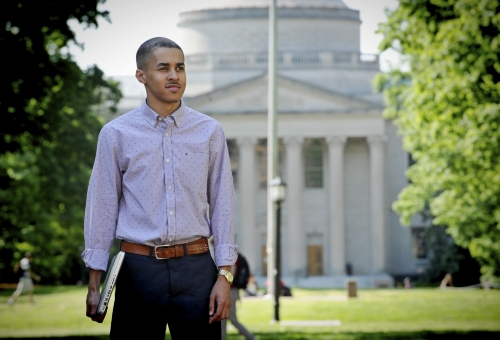 An A-student at A.L. Brown High School in his hometown of Kannapolis, Robinson struggled to hit the mark in the classroom during his first two semesters at Carolina.

For a while, he began to doubt that he would make it to graduation. But with the guidance of family, friends, faculty mentors — and Carolina MALES (Men Advocating for Learning, Empowerment, and Success), an organization dedicated to providing support for minority men — he finds himself where he wasn’t sure he was ever going to be: among the nearly 5,000 undergraduate students who received their degrees May 10 at Spring Commencement.

“I think about it every day,” Robinson said of graduation. “That day is just going to be surreal. It’s going to be awesome. … I came here to graduate — that was the goal — but there were several times where I didn’t think I would be here.”

Robinson — who went from early academic struggles to becoming a member of the prestigious Order of the Golden Fleece honorary society — became a first-generation graduate with a degree in communication studies from the College of Arts and Sciences when he turned his tassel on Sunday.

He is one of more than 600 Carolina Firsts to graduate this year; Chancellor Carol L. Folt honored them by hand-signing the diploma of each first-generation student who graduates in May.

Robinson’s four-year journey to Kenan Stadium for graduation wasn’t always easy. He enrolled at UNC-Chapel Hill with the encouragement of a high school guidance counselor: “She said this is the crème of the crop — the best you can possibly attend,” Robinson said.

But without a support system on campus, Robinson’s tenure at Carolina had a rocky start.

“I struggled with having to accept that I may have to sit down and take three or four hours to do homework,” he said. “It was a pride issue of coming out (of high school) with straight A’s to having to work my tail off and I might get a C.”

After being declared academically ineligible at the end of his freshmen year, Robinson stayed on campus for summer school and focused solely on his academics – improving his GPA enough to return for his sophomore year. But the close call was a reality check.

“I realized there were a lot of people who had invested a lot in me — my high school guidance counselor, my parents, teachers I’ve had along the way, high school coaches, my church family,” he said. “There were so many people that supported me and I didn’t want to let them down.”

To find success at Carolina, Robinson created a new support structure and faculty mentors and friends who helped him get back on track. Among his new supporters was Dex Robinson, an academic advisor who became the student’s mentor for the next three years.

“He’s put together a team that if he has questions, if he has problems, if he has ideas he can turn to folks,” Dex Robinson said. “It’s big to have that support system. Without that support system it’s easy to fall through the cracks because you don’t have anybody watching your back. You have to be able to check in with folks.”

While regaining his footing in the classroom, Robinson found more help from the Carolina MALES.

Late in his freshman year, Robinson attended a roundtable discussion sponsored by the organization. There, he heard stories of classmates who didn’t return to school. Having been on the edge of failing out, Robinson felt he could help.

“I realized how close I was to being that person that didn’t come back,” he said. “I knew if I had that problem, and if these guys knew friends that had the problem, then there was going to be somebody else that was having that problem or would have this problem after me. I just wanted to do anything I could to keep people from taking that same path.”

During his sophomore year Carolina MALES became an official university organization and Robinson became one of the group’s leaders for the next three years. The student organized retreats for first-year students, symposiums and created mentor relationships between students.

“I think he found his heel print and took it and ran with it,” Dex said. “He said ‘I found a way to be successful here. I just want to share.’ ”

Along the way, Robinson’s grades continued to improve and his leadership left a lasting mark on the campus. In 2014, the student’s efforts were recognized when he was inducted into the Order of the Fleece, the highest honorary society at the university.

“It was unbelievable,” he said of the induction.

Robinson is now preparing to start a masters of management program at Wake Forest University in the fall. The goal, he said, is to take the leadership skills he honed at Carolina into the business world where he can continue to help his community as a business owner.

Bieltz works in the UNC-Chapel Hill Office of Communications and Public Affairs.

Laptops from Sacred Heart are an “answer to prayer”