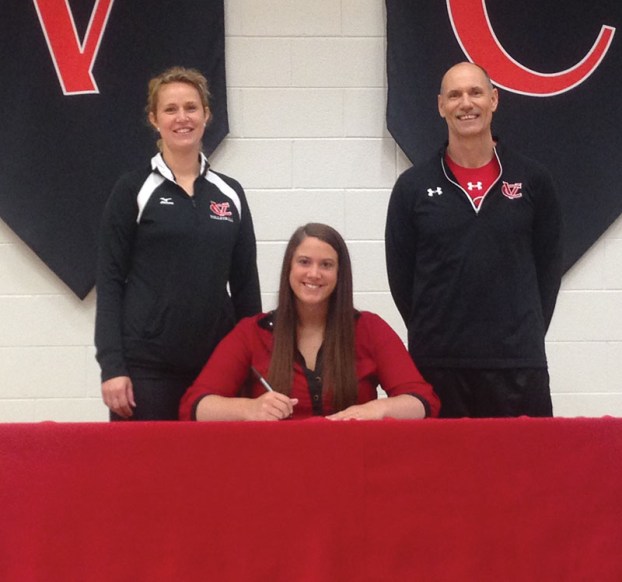 One of the best all-round volleyball players ever to suit up in Rowan County, Aimee Cloninger was a driving force in Carson’s 3A state runner-up finish in fall 2012.

Cloninger was devastating as an outside hitter and jump-server for coach Kelan Rogers’ Cougars, and she also could dig and pass with the best on the back row. She stayed on the court for every point until the Cougars were certain of victory.

She hasn’t lost a step.

“We won a lot at Carson and won conference championships both years at Catawba Valley,” Cloninger said. “I wanted to go to a college where they had a good chance to win.”

Growing up mostly in Nebraska as the daughter of a minister, Cloninger started playing volleyball in the fourth grade. That gave her a head start and the competition never caught up after she moved to Rowan County as a high school freshman.

Cloninger, 5-foot-10, was injured her junior season at Carson, tearing the meniscus in both knees and undergoing one surgery early in the volleyball season and a second surgery after it was over.

But she was healthy as a senior, as Carson won memorable matches in the North Piedmont Conference tournament and kept rolling all the way to the state championship game. Cloninger wasn’t awed by powerful Cardinal Gibbons and had 12 kills in the state-title match.

Cloninger had bigger offers t0 consider in spring of her senior year, but she chose CVCC. She liked the coaches and she wanted a transition period to make sure her knees would stay healthy.

“The knees are still a little sore at times,”” Cloninger said. “But I stayed injury-free at CVCC. I feel great.”

Cloninger was team MVP, Region X Player of the Year  and district MVP as a freshman and led CVCC to conference, district and regional championships and a No. 11 national ranking.

She captained the Redhawks to a 34-7 record and a conference championship as a sophomore. She was all-conference, all-region and all-district.

Cloninger set a number of records at CVCC as a sophomore, including one for points per set (4.4). She was among the national junior college leaders in kills (461) and aces (75) and had 448 digs.

“I think that points per set record was the individual accomplishment I’m proudest of,” Cloninger said.

Cloninger expects to be a right-side hitter for Belmont Abbey and is likely to excel, but her primary focus is on getting a degree in elementary education. She has a clear view of the big picture.

Before she becomes a teacher — her age preference is third grade or younger —  she’ll school a few more opponents in volleyball.

“Belmont Abbey is getting a strong leader,” Hudson said. “Aimee is a powerhouse athlete.”

From staff reports North Rowan’s baseball team hung in the game a long time with East Davidson in Wednesday’s 2A... read more