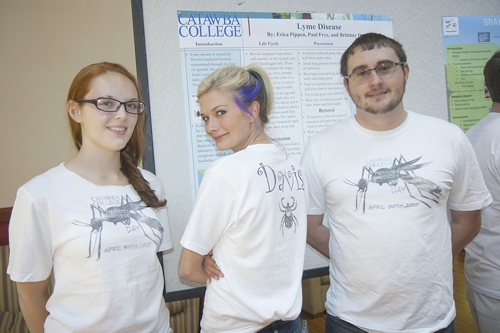 Ask Catawba College senior Finn Fürstenwerth what the smallest and deadliest parasite is in his opinion, and he’ll tell you without question that it’s the brain-eating amoeba, Naegleria fowleri.

Fürstenwerth came to that conclusion through the research he and classmates Elizabeth Brown, Joshua York and Taylor Spillman, conducted as part of their parasitology course this semester to promote education on parasitic diseases.

The students presented their research findings April 30 during an hour-long Parasite Awareness Day event sponsored by the campus Pre-Health Club and held in Leonard Lounge of the Cannon Student Center.

“There have only been 132 cases of primary amoebic meningoencephalitis or PAM caused by this parasite in the last 50 or so years; all but three infections were fatal, with most succumbing to infection within five days,” Fürstenwerth explained. “This is the most interesting parasite because it is so fascinating that a tiny organism can cause so much harm. It speaks to its intrigue – it’s really efficient at killing humans, even though humans are incidental in the amoeba’s life cycle.”

In this same parasitology course taught by Dr. Carmony Hartwig, Paul Frye, Brittnay Davis and Erica Pippen of Durham, presented information on Lyme Disease, a malady caused by the spirochete bacteria Borrelia burgdorferi. This bacteria is transmitted through the bite of primarily the black-legged tick ectoparasite, present in many areas of North Carolina.

A bull’s eye rash around the tick bite, Frye said, is “a telltale sign of the onset of Lyme Disease” with symptoms that also include fever, nausea, headache and fatigue.

Frye says ticks that transmit this and other bacterial pathogens “start out as six-legged larva then molt into eight-legged nymphs and finally adults.” Some ticks can take up to three years to complete this life cycle, while some species do it in as little as six months.

And what does it take for a tick to transform between stages? Frye noted that it is a blood meal from a host.

“Since it’s a bacterial infection, once you treat someone who has Lyme Disease with antibiotics, it’s gone, but they can get it again,” Frye explained. “A couple of places are working on a vaccine for humans, and one already exists for dogs, but it’s hard to diagnose in dogs – the way you do it accurately is through a blood test.”

Audrey Hoffman, Shannon Garrick and Elizabeth Overman focused their research on Toxoplasma gondii, a prevalent disease in which the majority of people infected do not know they carry the parasite. Ironically, preventing the spread of it can be as simple as using water and soap to clean your hands, or making certain that meat is thoroughly cooked.

Spread by the consumption of raw meat, unwashed fruit and vegetables and cat feces, Toxoplasma gondii is most dangerous to pregnant women and can cause birth defects, brain damage, severe illness in those with weakened immune systems, like those infected with HIV and even blindness.