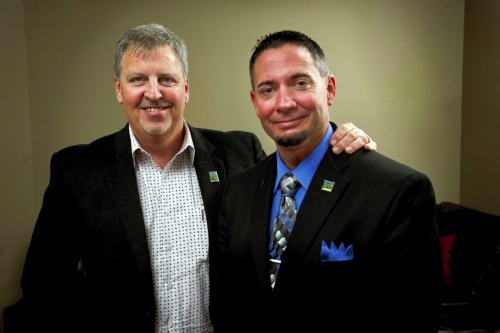 SALISBURY — About two-and-a-half weeks after the Rev. Tim Jones had donated one of his kidneys to friend Don Herbert, Jones was the one struggling.

He had blown up like a balloon, gaining 35 pounds of fluid leaking from the site of his surgery. Jones was ultimately rushed to Carolina Medical Center-NorthEast, where he was able to lose all of that fluid in four days.

“I had a real close call with death,” Jones said Monday. “… It really beat me up. There was a point there I thought I was going to die, but everything’s good now, and my kidney’s working great.”

The unusual story of Jones and Herbert, a Facebook plea from Herbert’s wife and Jones’ decision to give a kidney to Herbert will be the subject of an upcoming segment on the “The 700 Club.”

“The story definitely touched some people, and it definitely changed me,” Jones said.

A crew with “The 700 Club,” a live weekday show on the Christian Broadcasting Network and closely associated with host Pat Robertson, will be in Kannapolis today, filming scenes and interviewing Jones, Herbert and others.

“I am looking forward to getting a chance to share the story again,” Herbert said. “I know there’s still hope in the world — that’s the whole message, that Jesus is alive and can still perform miracles in your life.”

Herbert said he is feeling 100 percent better since the transplant, which probably saved his life. People have told him his color has returned, while he personally feels rejuvenated.

“I didn’t think I looked that bad, but apparently I did,” said Herbert, who has been singing gospel since 1986 and is a former professional wrestler, who went by the name of John Savage.

After surviving his close call after the surgery, doctors put Jones on a strict, fat-free diet for a month, and he now weighs 15 pounds under what his normal weight has been. He puts his recovery at about 80 percent and is supposed to be back at work as a surgical technologist in the operating room at CMC-NorthEast June 15.

There have been some major changes in the men’s lives since the transplant operation at Duke University Medical Center March 9.

Jones, 44, has become the new pastor of Independence Square Christian Church in Kannapolis, and his former smaller congregation, Mercy Independent Baptist, has been folded into that other church.

The longtime pastor at Independence Square Christian Church retired. This coming Sunday, from 11 a.m.-3 p.m., the church will offer a lot of singing, preaching and eating, Jones said, as he and Herbert gather with friends, family and congregational members.

The church is located at 1615 Independence Square, Kannapolis.

Jones and Herbert also have appeared together at several  other churches since the surgery, offering both a message and solo songs from Herbert.

Herbert, 56, said he has been doing a lot of solo singing, along with appearances with the gospel-singing quartet, Zion’s Hill. He underwent a liver transplant on March 17, 2013.

Jones and Herbert met briefly for the first time last October when Herbert stopped by a Saturday bake and craft sale at Jones’ former church. No mention was made then of Herbert’s health issues.

Not long after that chance meeting, Herbert had a stress test that revealed he needed a heart catheterization. Because of the need for that procedure, he was taken off a waiting list for a new kidney. Even if he were returned to the list, the typical waiting period for a kidney was three to five years, and Herbert’s prospects for living that long were slim, given his failing kidneys.

The sobering news led Don’s wife, Belinda, to post a personal plea on Facebook, asking anyone to consider giving Don a gift of life by donating a kidney.

Jones noticed Belinda’s post. He prayed a lot, talked it over with his wife, Sherry, and the couple soon invited the Herberts to their Salisbury home. The night ended with Jones offering to be a kidney donor for Don.

They announced Jones’ intended gift together at a Nov. 20 revival, Jones proved to be a good match, and over the months leading into the surgery, the men became close friends.

Herbert said all that has happened since last October seems like a long journey sometimes, but it also can feel as though he met Jones just yesterday.

“Hopefully, we’re over the big hump now,” Jones said. “I’ve always been firm in my faith, and I’ve never doubted, but God didn’t promise I would always be on the mountaintop.”