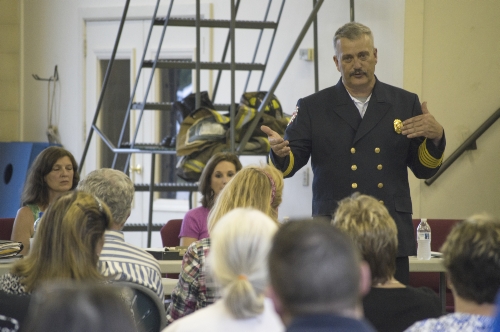 Nearly 200 people gathered Tuesday at the Millers Ferry Fire Department’s Station 64 for the agency’s annual meeting. Up for consideration was the election of a new department president, vice president, treasurer and two board members. A number of attendees during the meeting criticized past decisions by the department’s leadership, including construction of a new fire station, the purchase of a rescue boat and creation of a dive team. Critics said the department appeared to be more concerned about residents living on High Rock Lake than the rest of the Millers Ferry district.

Despite criticism, all incumbents were re-elected by a hefty margin. Barry Childers won the president spot by a vote count of 122 to 40. Other races followed a similar pattern, with all incumbents receiving more than 120 votes.

Jim Carlton, who challenged Childers for the president position was among the critics of the department’s past actions, saying residents of the district near High Rock Lake were driving decisions.

“My only reason for getting involved is that i’d like to see this community get back together, and I think I can make that happen,” Carlton said. “I don’t like to see the way things are going. I want to see us come together.”

Fire Chief Bobby Fox addressed some of the more common concerns in a lengthy speech at the start of Monday’s meeting. He said the new fire station location was selected based on a five-mile radius from its original station that’s designated as a “protectable area.” Fox said the new station helped cover areas that previously didn’t fall in the five-mile radius. He said the boat purchase is an addition to the fire department’s tool box that is critical to serve the approximately one third of the district living on High Rock Lake.

Fox also addressed a proposed 1-cent increase in the district’s fire tax and common operating procedures of the department, such as a shift away from being a completely volunteer department.

“On average, for a $150,000 home, the increase would be $15 per year,” Fox said. “The increase was put in because it’s a revaluation year for the county, which we have absolutely no control over.”

Revaluation is a process that occurs every four years to gauge property values. Numbers submitted to Rowan County Manager Aaron Church state the total estimated valuation of property in the Millers Ferry District dropped from $625 million to $601.11 million. It was the second largest estimated drop in valuation. The Woodleaf Fire District saw a slightly larger drop in overall property value.

With the 1-cent increase, the Millers Ferry Fire District is projected to receive about $42,000 more in tax revenue per year.

Several members of the Millers Ferry Fire Department spoke about merits of the department’s decisions. Firefighters who spoke during the public comment portion of the meeting surpassed the number of people who criticized the department.

Childers spoke multiple times during the meeting. During one of his speeches, Childers addressed an increase in Fox’s salary — which recently increased from $12,000 per year to $18,000 per year. Childers cited salaries of other Rowan County fire chiefs, saying Fox was previously underpaid.