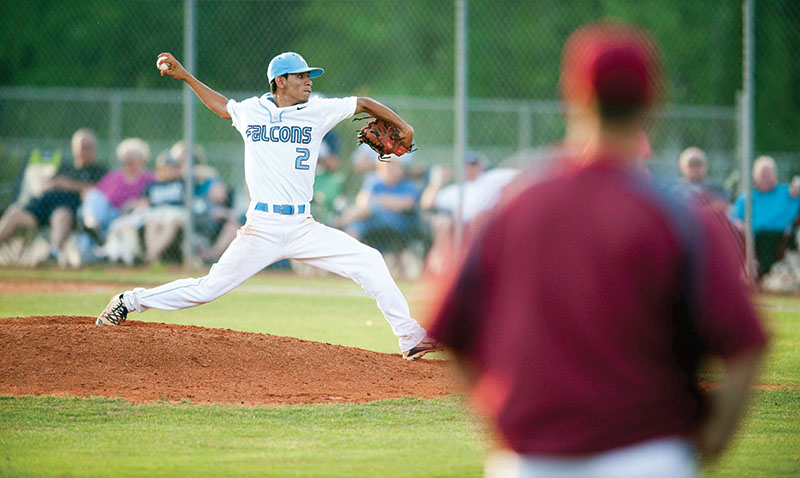 JON C. LAKEY / SALISBURY POST West Rowan’s Omar Bautista (2) brings the heat Tuesday against Hickory in the first round of the 3A state baseball playoffs. The Falcons won 9-1.

MOUNT ULLA — Confidence is half the battle, and West Rowan pitcher Omar Bautista not only has confidence, he makes his team confident.

“He’s been as tough as anyone the last three years,” West Rowan shortstop Jeremy Simpson said. “When he’s got the ball you know you’ve got a great chance to win and we usually play well behind him. We played a good Hickory team tonight, but Omar made it look a lot easier than it really was.”

Bautista, a senior, was in complete control on Tuesday in the first round of the 3A state playoffs. It wasn’t just the seven strikeouts, it was the command of a two-seam fastball that got him groundball after groundball. His teammates gobbled those groundballs up, swung the bats, ran the bases like a 4×100 relay team and steamrolled Hickory 9-1.

“They’ve played close against South Caldwell (a 4A powerhouse), so you know they weren’t scared of us,” West Rowan coach Seth Graham said. “But we were able to put a lot of pressure on them early by running the bases aggressively and we were able to give Omar runs to work with. We got the momentum and the way Omar was throwing, it was easy to keep it.”

Bautista’s only serious test was in the top of the first when Hickory had two infield hits with two men out — a groundball to deep short and a swinging bunt toward third. But Bautista struck out DH Jake Johnson to end the threat.

“I felt tough out there tonight, and we were fielding everything,” Bautista said. “They had two
infield hits that one inning, but I just had to put that behind me and keep pitching.”

West Rowan’s three-run first inning was decisive. Harrison Baucom singled, stole second, moved up a base on Simpson’s groundout and scored on Juan Garcia’s line single to left. Kacey Otto’s hit-and-run single and the first of five Hickory errors made it 2-0. After Trevor Atwood singled, Lee Poteat’s RBI groundout made it 3-0.

After the Falcons took advantage of two Hickory errors to score three more runs in the second it was all over. Simpson delivered a two-run single. Otto knocked in the run that made it 6-0.

“They were having some trouble on our hits to the outfield,” Simpson said. “It’s a fast outfield here and the ball will skip on you. We took advantage if they made mistakes and ran the bases hard.”

Hits by Walker Hanvey and Austin LaPierre and Jonathan Calcagne’s RBI groundout finally put Hickory on the board in the sixth.

Atwood singled home a run for the Falcons in the fifth. Simpson knocked in two more in the sixth for a four-RBI night.

“I thought about taking Omar out when we got the big lead, but he wouldn’t have been able to come back Friday anyway,”  Graham said. “We just let him keep doing what he was doing.”

Bautista only threw 78 pitches in a masterful performance.

“I got a lot of quick groundouts with  two-seamers on the hands,” Bautista said. “I mixed in fastballs away and some changeups.”

“We didn’t play well and West Rowan is a great team,” Hickory coach David Craft said. “We thought we could score early and get some confidence, but it didn’t happen.”

South Piedmont Conference champ West Rowan (18-6) bounced back from a stunning first-round loss in the SPC tournament to eighth-seeded Northwest Cabarrus, but as he always does, Graham found a silver lining in that loss.

“Losing in the tournament early gave us some extra days to practice, and we used them to get better,” Graham said.

West Rowan will play again Friday and will host the winner of Wednesday’s Cox Mill-Patton game.