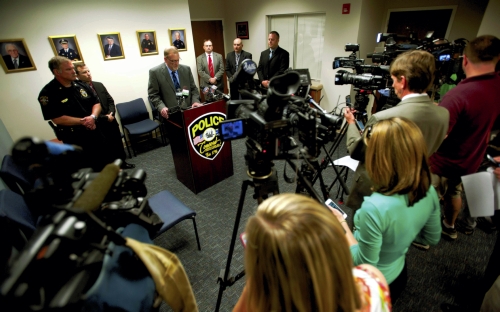 JON C. LAKEY / SALISBURY POST Concord Police Department held a press conference to announce that no criminal charges will be fired in shooting death case of David Bernard Pittarelli. City of Concord Police Chief Ryan Cochran Merl Hamilton read the press release and then took questions from reporters. The case which was reviewed by the District Attorney will have no criminal charges filed. Tuesday, May 12, 2015, in Concord, N.C.

The family of David Robert Pittarelli Jr. say they are disappointed that authorities won’t file charges against a Kannapolis firefighter that shot and killed the Charlotte man.

Investigators determined firefighter Ryan Cochran was acting in self defense when he fatally shot Pittarelli, who was the aggressor and may have mistaken Cochran and his girlfriend for other people.
Concord Police Chief Merl Hamilton announced the decision made by his department and Cabarrus County District Attorney Roxanne Vaneekhoven at a Tuesday morning news conference.

The decision comes two weeks after the shooting where Pittarelli, 33, was shot multiple times by Cochran, who was returning home from a baseball game with his girlfriend, Jessica Troutman.

Hamilton, flanked by investigators, spoke about the circumstances surrounding the incident.

Cochran, 22, of Concord, and Troutman were traveling on Concord-Salisbury Road toward Concord in his red pickup when they were followed by a Cadillac driven by Pittarelli. The vehicle followed the couple for several miles, and authorities say Cochran eventually stopped in a residential area at the intersection of Plott Drive and Charing Lane.
Investigators say they obtained a video from a traffic camera and had eyewitness accounts as well as physical evidence that helped them come to the conclusion that Ryan Cochran was protecting himself and girlfriend Troutman against Pittarelli.
“I’m very disappointed,” said David Anthony Pittarelli Sr., from his New York home.
He said he found the facts provided by the investigators to be “very sketchy” and the information “poor.”
David Pittarelli Sr. said he’s hired a private investigator who he believes will find the answers he seeks.
“There’s holes all over the place and I want to fill them,” he said.
“It’s beyond all of us — family and friends — as to how this can be misconstrued as self defense. He (Cochran) was a trained firefighter, why didn’t he exhaust all possible measures before ending someone’s life?” David Pittarelli Sr. asked.
Investigators said Troutman, who was driving, turned onto her street after they were followed about 5 miles. She told police the Cadillac was driving erratically, came close to her vehicle’s bumper, and was swerving all over the road. Footage from the traffic camera confirmed Pittarelli was driving aggressively, Hamilton said.
Hamilton said Pittarelli got out of his vehicle, and Cochran and Troutman got out of theirs. He said Pittarelli advanced toward Cochran, while continuing to yell and demand Cochran shake his hand.
When Cochran moved his gun from his right hand to his left hand so he could shake hands with Pittarelli, the Charlotte man yelled “are you going to shoot me” and “kill me you (expletive).”
Cochran backed away from Pittarelli while his girlfriend moved between the two and asked Pittarelli to leave.
Hamilton said Pittarelli hit Troutman in the neck, knocking her to the ground and then charged at Cochran.
The chief pointed out that Pittarelli was 6 feet, 4 inches tall and weighed 276 pounds, while Cochran is 5-foot-10 and 188 pounds.
Cochran then pointed his gun and fired. The chief said Pittarelli continued to charge, so Cochran continued to fire as he backed away. The firefighter fired his gun nine times, with five to seven rounds striking Pittarelli.
Cochran and a neighbor attempted first aid and CPR, Hamilton said.
Investigators believe Pittarelli left the home of a friend after he had a domestic confrontation with his girlfriend, who said Pittarelli assaulted her. Police say the assault occurred less than an hour before Pittarelli pursued Cochran’s vehicle.
“There are indications Pittarelli consumed a quantity of impairing substances, possibly cocaine, alcohol and potentially other substances, prior to his pursing the Cochran vehicle,” Hamilton said.
He said it’s not been confirmed, but investigators believe this was a case of mistaken identity and that Cochran’s vehicle looked similar to a truck owned by the neighbor of Pittarelli’s girlfriend.
Police investigators say the three did not know each other. Police have also said Pittarelli was not armed, nor was he wearing a shirt or shoes.
Cochran told investigators he had two beers at the baseball game and that was why his girlfriend was driving. Police said there is no evidence to suggest Cochran was impaired. They also said Cochran has a concealed-carry permit for the gun.
Authorities also said officers with the Charlotte-Mecklenburg Police Department had come into contact with Pittarelli on several occasions while responding to incidents at his Charlotte home. Those officers had seen Pittarelli “engraged, and dealing with him at these calls for service,” the officers said they felt he was dangerous enough to place a district-wide alert on his residence to say officers should not respond to his residence alone, Hamilton said.

“The police department expresses condolences to all involved with this tragic incident, but in particular to the Pittarelli family,” Hamilton said.

Cochran, who has been a firefighter since 2012, has been suspended with pay since the April 30 shooting. The city of Kannapolis issued this statement:

“Our thoughts and prayers continue to be with the family and friends of both Mr. David Pittarelli and Mr. Ryan Cochran. This is a very tragic event that has profoundly impacted our community.

“We have been awaiting the results of the investigation into this matter by the Concord Police Department and the Cabarrus County District Attorney’s Office. We will review the conclusions of their investigation. With no criminal charges being filed, Mr. Cochran’s suspension can be rescinded.”

David Pittarelli Sr. said he believes it’s possible his son may have been intoxicated and consumed other substances that night, but he said Cochran admitted he’d also consumed alcohol that night.

Pittarelli questioned why detectives did not require Cochran to submit to a breathalyzer test to determine his alcohol content.

He said he’s had an extremely difficult week — the family buried David Pittarelli Jr. on Saturday and now received news about the investigation. Pittarelli said he had such a difficult time getting his son to New York that he had no choice but to have a closed casket funeral because of the state of his son’s body.

“I’m exhausted, but I will not give up on my attempt to seek justice,” he said.

David Pittarelli Sr.’s brother, Rick Pitarelli, had a hard time with expressing his feelings about the outcome of the investigation.

Rick Pittarelli said he would like to see the evidence on Jessica Troutman that showed his nephew hit her.

“Police did not take a picture. There’s no evidence,” he said.

Rick Pittarelli questioned whether the law allows for people with concealed-carry permits to carry their weapons if they’ve consumed alcohol.

He supports his brother’s decision to pursue further investigation.

“When there’s so many questions you have running in your mind. The family needs closure and you can’t get closure when you need answers,” Rick Pittarelli said.

He disagrees with investigators determination that Cochran tried to administer CPR to his nephew. He said the time frame doesn’t add up. He questioned that in the time that Cochran was on the phone with 911 and officers arrived, when would he have performed CPR.

According to the 911 phone call Cochran was on the phone with dispatchers until police arrived.

He said his nephew wasn’t the height and weight investigators said. Rick Pittarelli said David was 6-foot-2-inches and 230 pounds.

“I’m disappointed it came to the resolution of the decision they made. I don’t have to agree with it. My brother doesn’t have to accept it, that’s why I support him,” he said.

Rick Pittarelli said he wants people to know his nephew wasn’t a monster.

“Every human being on this earth has faults and we’ve all done something wrong. He was a compassionate person who loved his son dearly. He tried to focus on his walk with Jesus Christ every day,” he said.

A phone call to Ryan Cochran was not immediately returned.