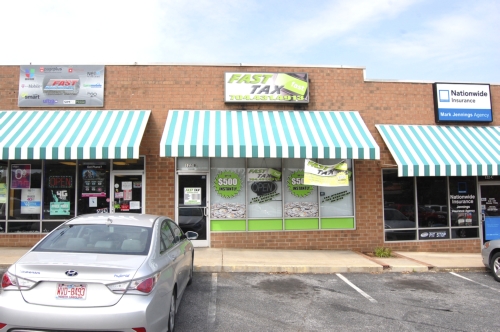 Federal agents were at this tax service office off Avalon Drive in Salisbury Tuesday morning.

Federal agents were at a tax service business in Salisbury Tuesday morning.

The agents were at Fast Tax at 122B Avalon Drive — in a business plaza. The agent who came to the door at the business said he couldn’t comment on the situation and would not say what department of the government he was with. His badge said U.S. Special Agent and he was armed. He gave a Post reporter a number for a public information person. The number shows up on a list of state contacts for Internal Revenue Service criminal investigations on the IRS website.

Calls to the spokesperson have not been returned.

The agents, wearing latex gloves, appeared to be going through files in the business.

The Post requested a copy of the business license for Fast Tax from the city, but a city official said there is no license for a Fast Tax at that location.

Reza Sharif, who owns a cellphone business next door to Fast Tax, said Fast Tax is operated by two sisters, though he said he didn’t know their names. He said the business had been there for about five months.

The business was closed Tuesday afternoon and no one appeared to be inside. Phone calls to the number listed on the business signs in the window were not answered.