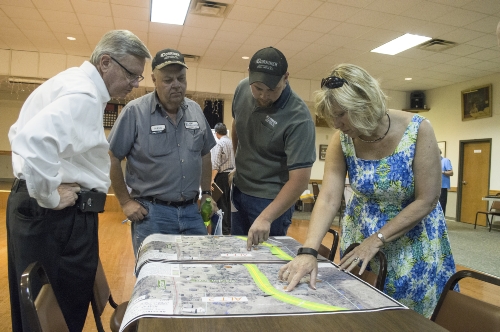 Josh Bergeron / Salisbury Post - Attendees of a Department of Transportation public hearing about the extension of Kimball Road look over maps of two proposed options Tuesday. The hearing was held at the Moose Family Center on Old Beatty Ford Road.

During a public meeting on Tuesday, DOT representatives presented maps of a project to extend Kimball Road from North Chapel Street, near the border of China Grove and Landis, to U.S. 29. Project maps of the project show two different options. The first option bends toward Landis and runs through a group of residences on Brandon Scott Lane. The second option would cut off the front yard of a house on Brandon Scott Lane and a building that’s vacant and for sale on U.S. 29.

The cost of the project is largely the same regardless of the route, Ivey said. As a result, he said public comments will play a large part in the final route chosen.

“If you look through just the data, they’re pretty much equal,” Ivey said. “Essentially, the public will weigh heavily on which decision we make.”

An environmental study for the Kimball Road project will be complete in 2015, he said. Property acquisition would begin in December 2016 and construction would start in 2018, according to project documents.

During Tuesday’s public meeting, residents near the proposed extension steadily filed into the Moose Family Center on Old Beatty Ford Road. Carlton Corriher, who lives on Brandon Scott Lane, said he preferred the first option because it would run through his back yard. The second option would cut directly through his front yard.

“I’d rather it come through my back yard than my front door,” Corriher said.

After talking with DOT officials, attendees were prompted to fill out a comment card about the proposed Kimball Road extension.

The extension of Kimball Road has been a long-considered project, dating back to the late 1990s — when a feasibility study was conducted. Project documents use lengthy distance between direction connections of South Main Street and U.S. 29 as a reason for the project. Ivey said locations of houses close to other roads in the area made Kimball’s Road’s extension a more attractive option.

In addition to a meeting for the general public, DOT also met with local government officials to gauge input. After the meeting with public officials, Ivey said DOT’s Division 9 would look for funding to improve Chapel Street. China Grove Mayor Don Bringle said after the public meeting that he’s concerned about how North Chapel Street might be affected by the construction.

Bringle said the China Grove Town Board would draft a resolution supporting one of the two options. Overall, Bringle said the project would provide a safe route for motorists to drive from South Main Street to U.S. 29.

Nearby residents who weren’t able to attend the public meeting can still contact DOT representatives for information about the proposal or to submit public comments on the project. The Kimball Road extension project’s contact are Michael Wray — mgwray@ncdot.gov — and Kristina Miller — kmiller@rkk.com. Ivey said nearby residents could also contact Division 9’s offices at 336-747-7800.

The deadline for public comments is June 2.