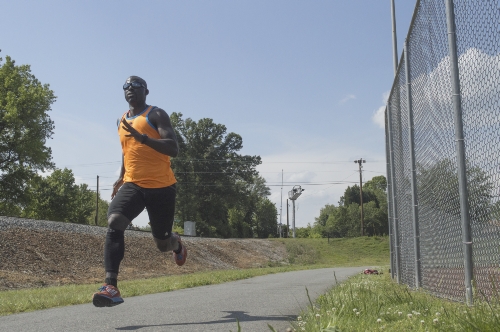 Josh Bergeron / Salisbury Post - Rowan County native Carlos Ross on Monday runs at a park on Martin Luther King Jr. Avenue. Ross runs for the Atlanta Track Club. In his division, Ross is ranked 5th in the U.S. in the 200 meter dash and 10th in the world.

The sun beat down on Rowan County Monday raising temperatures across the region.

The heat, however, didn’t deter Rowan County Native Carlos Ross. Beads of sweat formed just above his brow, but he sped across a walking path in a Martin Luther King Jr. Avenue Park in the blink of an eye. He sprinted down a concrete track, breaking briefly between sprints.

Ross on Monday was running in preparation for an upcoming meet in Greensboro. Ross, 34, runs for Atlanta Track Club in the 30 to 44 year-old age group.

He graduated from North Rowan in 1999 and continued running, still at the top of his game.

Barbecue in the Carolinas, from shoulders to hogs to vinegar and mustard