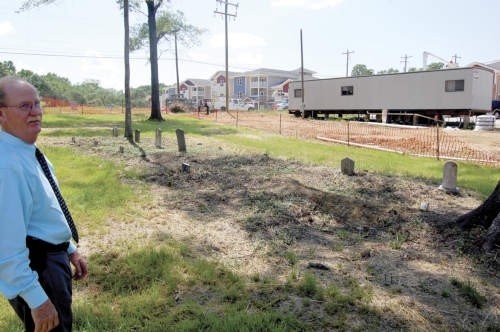 Sam Foust, executive director of the Salisbury Housing Authority, stands by the gravesite found near the site of the new Civic Park Aparments, in the background. The graves were covered by vegetation before the land was cleared for the new development. A fence will be put around the site for protection and plaque detailing the history of graves will be installed.

The old Civic Park Apartments, which will soon be demolished, stand on the other side of Hall Street from the gravesite. The headstones show the graves belong to members of an American-American family, some who were former slaves.

As the development continues at the new Civic Park Apartments, steps are being taken to protect a piece of history found nearby.

A gravesite was found in the dense vegetation behind where the new apartments are going up along Brenner Avenue. The site is actually closer to the corner of Standish and Hall streets. Now that the vegetation has been cleared, the graves are in plain view.

A surveyor came across the graves in the fall of 2013, Sam Foust, executive director of the Salisbury Housing Authority, said. He said the gravesite will be fenced in and surrounded by greenspace. And a marker detailing who the people buried there were will be put up, Foust said.

The graves are likely those of former slaves and their descendants, according to local historian Betty Dan Spencer, who spent several weeks researching the names on the graves shortly after they were found. She said it’s possible the former slaves in the family were once owned by the family of William H. Horah, a silversmith and later a bank clerk, who died in 1863 — Horah Street was named after him in July 1866 by order of the county’s Board of Commissioners.

Spencer used Census, court and property records to construct a family tree of the African-American Horahs. She calls the site the “Horah Family Cemetery.”

According to family tree, Wm. R Horah is William Reid “Reedy,” the son of Henry and Margaret Horah. William was born Sept. 13, 1861. He died in 1910. In 1886, he married Ella Luckey, daughter of Cornelius and Eliza Luckey.

Cornelius Lucky was born circa 1838. He was owned by a Samuel Luckey, who owned 20 slaves in 1850. Cornelius married another slave, Eliza, in 1864 — but the marriage was not legally recognized because they were slaves. After the end of the Civil War in 1865, former slaves could have their marriages legally recorded. His and Eliza’s marriage was recorded in Rowan County’s record books Aug. 10, 1866.

A 1910 census, shows Cornelius living with his daughter, Ella, in Cumberland County, New Jersey. He was listed as being 70 years old at the time. Ella was now a widow. Her husband, Reedy Horah, had died in March 1910.

Reedy and Ella had 12 children, including Oler and Charlie L. Charlie was born in 1896 but lived less than three months. Oler, who Spencer said was likely a girl — but she can’t be sure — was born in Maryland, probably in or near Baltimore, but lived for only 11 months.

Oler may have had a twin, according to Spencer. She found another child of William and Ella, named Lola, listed as being born in Maryland circa 1902, the same time as Oler.

Two other sons of William Reid and Ella were William Robinson, whose grave at the site says he was born in 1892 and died in 1930, and Franklin Cornelius, who died in the summer of 1901.

Walter Hurrah was a nephew of William Reid and Ella. His father was James Horah Jr. According to his headstone, Walter died in August 1925 at the age of 38. A birthdate is not on the headstone. Spencer found records showing he was working as a longshoreman in Brooklyn, New York, in 1918.

William H. Horah’s son, John M., was elected Clerk of Court for Rowan County in the 1870s. Records show Horah, in his role as Clerk of Court, deeded about 3 acres of land to a “colored” man named Henry Horah, who may have been a former slave of the family. Henry was the highest bidder, $32, for the deed — the land was being held to secure a bond for Frank Ellis, who did not appear at his court date.

The land would later be passed to Henry’s son, William Reid “Reedy,” after Henry’s death sometime before 1888. William appears to have then deeded the land to his mother, Margaret, for $1.

“There’s a lot more work I could do on that,” Spencer said about the history of the African-American Horahs.

Note: information on William H. Horah and his son, John, was found in the “Cyclopedia of Eminent and Representative Men of the Carolinas of the Nineteenth Century: Volume II.”

Planning board will hear rezoning request

By David Purtell david.purtell@salisburypost.com The Salisbury Planning Board will hear a request Tuesday to rezone a piece of property in... read more