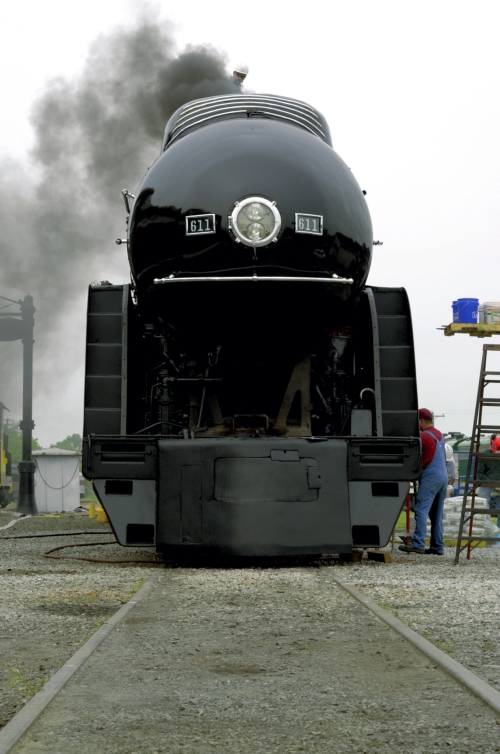 A restored Class J 611 is among the historic engines that have come through the N.C. Transportation Museum.

Train buffs, mark your calendars for Saturday, May 23.

A rare behemoth will receive a big send-off at the N.C. Transportation Museum that day before departing for its birthplace and home in Roanoke, Va.

That behemoth is the recently restored Norfolk & Western Class J 611, one of the last mainline steam locomotives produced before diesel became the fuel of choice for the railroad industry.

The 611 headlined the National Train Day celebration at the Transportation Museum on Saturday, and for good reason. The engine has been at the Spencer Shops for the past year, the focus of a multi-million-dollar restoration that is particularly near and dear to the people of Roanoke, Va. The 14 J class engines that once rode the rails were designed and built entirely by Norfolk & Western employees, and people there take great pride in the only remaining one, the 611.

The Virginia Museum of Transportation in Roanoke owns the 611. A few facts:

It’s hard to explain the fascination with steam engines. Call it respect. Scott Lindsay, chief mechanical engineer on the 611 restoration project, told a reporter the Class J steam engine “is basically a power plant that moves and feeds itself.” It was a modern wonder in the 1940s and 1950s, and it’s still a wonder today — built to last.

The fact that the 611 was restored in Spencer says a lot about the N.C. Transportation Museum and its facilities. The museum is obviously more than a tourist destination when it’s the top choice for a restoration project of this importance. The rebirth of the 611 is a major accomplishment.