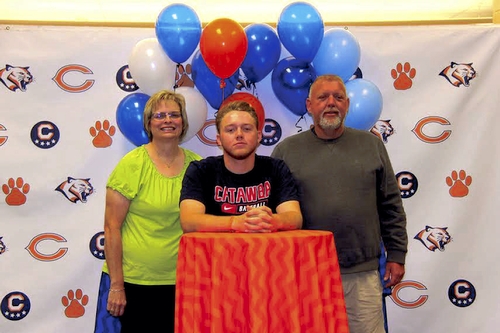 Heath Mitchem, center, has signed a national letter-of-intent to play baseball at Catawba College. The Carson High School standout is flanked by his parents, Sandra Mitchem, left, and Barry Mitchem.

CHINA GROVE — Catawba College-bound senior Heath Mitchem did it quietly, but he’s produced more base hits than anyone who’s ever worn a Carson uniform.

Gunnar Hogan, Carson’s four-year shortstop from 2008-11, had 109 hits and held the school record four years. Mitchem moved past Hogan in Carson’s marathon, 13-inning win against Concord in the first round of the  South Piedmont Conference Tournament last week.

“Heath has been a four-year mainstay for us,” Carson coach Chris Cauble said. “He doesn’t strike out, he puts the ball in play, and he uses the whole field. Every year, he’s been one of our leading hitters.”

Mitchem has led Carson in walks this season and has an on-base percentage of over .600.

He’s a lefty pitcher as well as a lefty hitter. He’ll have a chance to be a two-way player for Catawba.

“Catawba was probably the last place I wanted to go for a long time because both of my parents (Barry and Sandra) went to school there,” Mitchem said with a laugh. “But then I played for Coach (Jim) Gantt with Rowan County American Legion, and that’s when I realized I wanted to play for Coach Gantt in college. I like to hit and I like to pitch.  I’ll have a shot at doing both at Catawba.”

Gantt likes Mitchem’s curveball but he likes his bat even more. Mitchem plays first base for Carson, but he usually plays left field for the Rowan County Legion team. Being the designated hitter (DH) will also be an option.

“As a pitcher, he’s got a chance to help us as a short reliever, as a lefty matchup guy,” Gantt said. “Sean Grant’s been good in that role, and he’ll be a senior next year. We’ve also got Michael Elwell as a lefty in the pen now, but there’s a good chance he’ll  be a starter for us next year.”

Mitchem has piled up hits without fanfare. It’s been a steady stream of line-drive, opposite-field singles — a lot of 2-for-3s and 2-for-4s. He’s never hit a homer for Carson, but he has 21 doubles.

Mitchem is a big guy at 6-foot-3, 225 pounds, so Cauble and Gantt are confident his power is going to develop. He’s third on Carson’s all-time RBI list with 60.

“He’s been in a different role for us this year as a guy who is counted on to drive in runs,” Cauble said. “He’s starting to turn on the ball more when he gets his pitch and he does have some power. He drilled one to the base of the center-field fence in our home game against South Rowan. As he gets older, he’s going to develop power to all fields.”

Mitchem is a good student who plans to major in economics.

“We’re all excited about playing together and playing for Catawba,” Mitchem said.  “When you go to Catawba, it means you’re going to be competing for championships.”

When Mitchem graduates, Carson will have a hole in the lineup as well as the pitching staff, but it’s been a great four years. Mitchem has been a part of 83 victories.

“We’ll miss hit bat, his arm and his sense of humor,” Cauble added.

By Mike London mike.london@salisburypost.com SALISBURY —  Nelson Leonard Pharr died on May 1, a few days before his 78th birthday.... read more