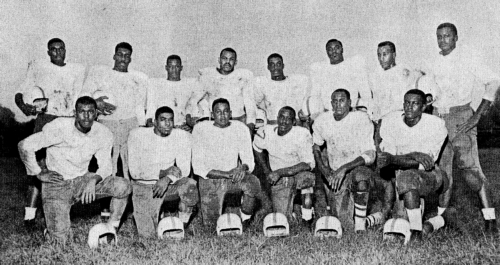 Nelson Pharr, front row, third from right, died on May 1.

SALISBURY —  Nelson Leonard Pharr died on May 1, a few days before his 78th birthday.

Pharr is remembered by those who were sports fans in the 1950s as a talented quarterback on good football teams.

J.C. Price lost only one game in the three-season period from 1950-52, and the Red Devils hadn’t dropped off much by 1954. Pharr shared quarterback duties with James Holmes. Both QBs were inducted into the J.C. Price Hall of Fame in 2007.

J.C. Price went 6-1-1 in 1954. The blemishes on the record were a 12-6 loss to Belmont Reid early in the season and a scoreless tie with Lexington Dunbar. Pharr also played defense and helped the Red Devils shut out Mount Airy, Hickory Ridgeview,  Morganton Olive Hill and Statesville Morningside,  as well as Lexington.

J.C. Price allowed just 19 points in eight games. Besides the Belmont Reid loss, the only touchdown scored against Price that season came in the Red Devils’ homecoming game against Monroe Winchester at Boyden High School’s stadium.

Pharr rescued homecoming. He threw a game-winning touchdown pass to Elijah Alexander with 10 seconds left for a 14-7 victory.

The Red Devils finished the season a week later by pounding Statesville Morningside on Livingstone’s field. Pharr also had a touchdown pass in that one. He found William Smith for a 30-yard scoring play.

Pharr went on to play for Livingstone. The Bears’ head coach was Edward Mitchell.

Many of Mitchell’s recruits were local. On the 28-man 1957 Livingstone roster, there were 10 players from Salisbury, one from Granite Quarry and one from Kannapolis.

Pharr had a shining moment in 1956 — a game-winning, 39-yard touchdown pass in the fourth quarter to Kannapolis’ Charles McIlwaine. That clutch completion lifted Livingstone to a 6-0 win against Norfolk, one of its biggest rivals.

Pharr’s best season at Livingstone was 1957. He was instrumental in the Bears sharing the league championship of the Eastern Intercollegiate Conference with Norfolk.

In the tie with J.C. Smith, Pharr connected on a 45-yard touchdown pass to co-captain Lewis Martin.

Livingstone had to play its last two games with only two days rest. The Bears beat Friendship, 20-0, on Saturday, Nov. 23, and then played a makeup game, with a share of the conference championship at stake, against the S.C. Area Trade School on Tuesday, Nov. 26.

Pharr was honorable mention on the All-Eastern Intercollegiate Conference team.

Quentin Woodward Jr., a member of the Rowan County Sports Hall of Fame committee, is among those who knew Pharr.

“He was a devoted father, a faithful member of Moores Chapel AME Zion Church and a quiet, gentle spirit whose legacy will always be remembered,” Woodward said.

MOUNT ULLA — It was the simplest gameplan Scott Young had ever taken into a game. He had just one goal:... read more