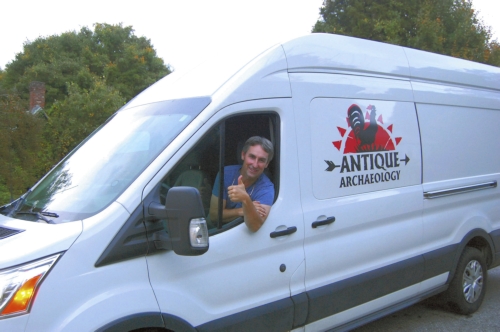 The “American Pickers” episode which includes Clyde, a Salisbury artist, collector and picker himself, will air at 9 p.m. Wednesday on The History Channel.

In the Salisbury area, The History Channel airs on channel 65 for Time Warner Cable customers and channel 133 for Fibrant customers.

“American Pickers” features the travels of pickers Mike Wolfe and Frank Fritz, who spent a day with Clyde last October along with the show’s film crew. Until he received a call from the show’s producer telling him of the Wednesday night air date, Clyde did not know when the Salisbury show would be on.

This is a bit of a spoiler, but Clyde reports Wolfe and Fritz picked $1,200 worth of items from his properties off East Bank Street.

Interestingly, Clyde has never seen the show but has discovered how popular it is just from the many questions he has fielded since the show’s taping.

He’s not even sure he’ll watch it Wednesday night.

“I’ll just wait to hear about it,” he said Monday.

Here’s something you might not see in Wednesday’s episode. Mosquitoes bit Fritz a couple of times on the face, which required extra makeup to hide the bites.

Clyde said he encouraged Wolfe and Fritz to take their show to Don Cline’s vast pickers’ paradise in Mount Pleasant, but one drawback was that Cline doesn’t dicker on price, which is a big part of what Wolfe and Fritz do.

“I learned everything I know from Don Cline,” Clyde said, adding it was at Cline’s place that he first heard the word “picker.”

As reported back in March, Clyde also helped to make a wish come true for 16-year-old Will Grossman of Lincoln, Neb., who has been fighting anaplastic large cell lymphoma. Grossman’s request to Make-A-Wish Foundation was to participate in a pick with Wolfe and Fritz, and it just happened to take place with Clyde in Salisbury.

Michele Lobl of Valencia, Calif., provided this photograph of the last eighth-grade class to graduate from Frank B. John School,... read more