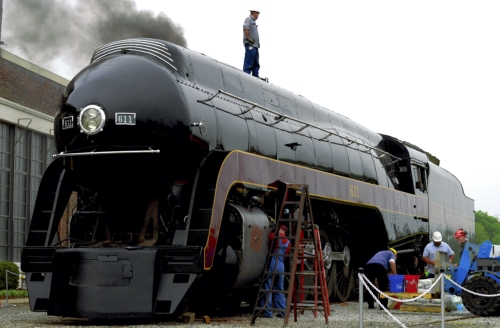 SPENCER – The early clouds burned off to give attendees at National Train Day blue skies for a morning of history at the N.C. Transportation Museum.

Norfolk Southern railroad exhibits, children’s activities and train rides were among the festivities at the seventh annual celebration of railroading.

National Train Day was started by Amtrak in 2008 to celebrate rail travel.

In addition to a Norfolk Southern locomotive painted in special colors to honor America’s veterans, several special exhibit cars were brought in for the festivities.

In Spencer, railroad history is evident in the town that was for decades home to the former Southern Railway steam locomotive repair shop.

Fittingly, for many the centerpiece of the morning was a chance to get up close and see the newly-restored Norfolk & Western Class J 611, one of the last mainline steam locomotives ever produced.

Owned by the Virginia Museum of Transportation, the 611 has been fully inspected and restored at the Spencer shops – a process that has taken almost a year.

Scott Lindsay, chief mechanical officer on the 611 restoration project, said restoring the 611 had taken lots of time, lots of love and the work of many dedicated volunteers.

“It’s an iconic mechanical piece of machinery,” said Kelly Alexander, chief operating officer of the N.C. Transportation Museum. “People know the 611 all across the country, and all across the world. We feel honored that the Virginia Museum of Transportation chose our facility to do the restoration.”

The Class J steam engine “is basically a power plant that moves and feeds itself,” Scott Lindsay said. “It generates steam, it generates electricity.”

The J-class coal-fired locomotives were produced between 1948 and 1951, according to information on the website for the restoration project, FireUp611.org.

At full power, the Class J produced over 5,000 horsepower and could pull a 15-car passenger train at speeds over 100 miles per hour.

Visitors gathered to shoot photos of the slumbering 611 on the tracks outside the roundhouse, smoke slowly rising from the fire in its boiler as hundreds of gallons of water were heated for testing.

A team of workers stayed busy around the locomotive. Some lifted buckets of sand to fill a reservoir that puts sand on the wheels for traction in wet weather. Others were busy working around the wheels at ground level.

After the 611 was towed to Spencer last May, Lindsay said, the restoration team started the process of almost completely disassembling the boiler and performing a Federal Railroad Administration “1472 inspection,” Lindsay said.

That’s the term for the mandatory full inspection of a steam locomotive after 15 years or 1,472 service days, whichever comes first.

“We stripped off all the sheet metal and insulation, gutted the engine to the boiler,” Lindsay said.

In addition to cleaning and hydrostatic pressure testing, crews performed an ultrasonic inspection to verify the thickness of the metal, he said.

“And then we inspected all the auxiliaries, the feed lines, the dynamos – all the systems,” Lindsay said.

After Engine 611 made its last passenger run in 1959, it was purchased by the former Roanoke Transportation Museum.

It was first restored in 1981, then used on Norfolk and Western steam excursion trips.

When the steam excursion program was discontinued in 1994, the 611 was retired and parked in Roanoke.

Nineteen years later, the Fire Up 611! Committee was formed, and today the historic locomotive is getting ready for a return to Virginia under its own power at the end of the month.

On National Train Day, Lindsay said the 611’s longevity is a tribute not only to rail travel, but to the engineering that went into its design.

“It’s going to be 65 years old in a couple of weeks,” Lindsay said. “I would challenge anything built today to be operating in 65 years. Back then, things weren’t built with a duty cycle, a maximum number of hours or days. They were built to be rebuilt and used again.”

For volunteer Gordon Snell, of Greensboro, the restoration of the Class J 611 was “impressive.”

“They did an excellent job on it,” Snell said. “I think the main thing that’s impressive is that it’s happened in such a quick amount of time.”

Ben Earp, a journalist, came to Spencer to take video of the 611 on the rails. For him, seeing the locomotive running again is a cause for celebration.

“This was one of my first memories of a train, the 611 running in Valdese, N.C.,” Earp said. “To see it running again brings back those childhood memories. Future generations, I hope, will have the same memories I did, and it’ll spark interest in trains for a lifetime.”

There will be other opportunities to see the Class J 611 before it leaves for Virginia at the end of May, Alexander said.

The locomotive will be operating on the grounds of the N.C. Transportation Museum on May 23.

On May 28th, a special photo charter event will be held. Alexander said photographers will have a chance to shoot images of the 611 at different locations on the N.C Transportation Museum grounds.