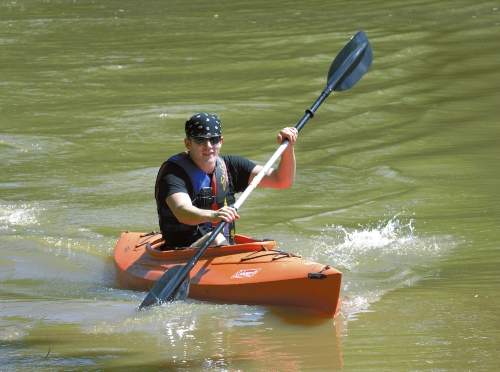 Zack Oster, a member of the Venturing Crew Scout Troop 448, finishing the South Yadkin Canoe and Kayak Race. photo by Wayne Hinshaw, for the Salisbury Post

A large turnout of river-goers took to the water Saturday for the 30th annual South Yadkin River Canoe and Kayak Race.

Men, women, boys and girls arrived early in the morning at the river-access area just north of the U.S. 601 bridge that crosses the river. Some came in old, beat-up pickup trucks with canoes sticking out from the truck bed. Other cars had the canoe or kayak tied to the roof, and the rest towed trailers containing the water-bound cargo.

Some of the boats, heavy and wide, were built for leisure. Others — long, lightweight and narrow — were built for speed. They came in a variety of colors: silver, orange, green and red to name a few.

Krispy Kreme donuts and coffee sat at the end of the table where people signed in. A big, tall board listed the boat numbers and names of the riders.

Oars, life jackets and water bottles filled the boats that sat in the grass. The race was set to start at 9:30 a.m., and the rising sun was quickly turning a comfortable morning into a hot day.

The event was sponsored by Boy Scout Troop 448, which has been organizing the race the last few years. Before that, Sam Bonds had been doing most of the work putting the event together each year since its inception.

Bonds was on hand Saturday, and so was Butch Hollifield, who participated in the first race back in 1986 and all but one since.

“It gets better every year,” Hollifield, who lives in Gold Hill, said. The “fun” is what keeps him coming back.

The race is 6 miles. It starts at the bridge and follows the river downstream as it runs northeast before bending south, followed by a sharp bend back to the north. Another curve back to the south leads into the final stretch of the race, which finishes at the old pump station just before “the point” where the South Yadkin River joins the Yadkin River.

The race is broken up into heats, with the faster and more experienced competitors starting first. “Serious paddlers,” is how someone described them. The fastest racers usually finish in around 40 minutes. The race is sanctioned by the U.S. Canoe Association.

In all, around 50 people took to the river for the race.

Out of the gate, the top racers cut straight lines through the muddy, gently flowing water before quickly disappearing around the bend.

Teams of two worked in unison, switching their oars from side to side every two or three strokes.

When the less experienced canoers and kayakers — including many first-timers — started the race, things got a little chaotic. Some boats went sideways against the current. Boats bumped and crashed into each other in the crowded water. A couple of young boys drove their canoe into a low hanging tree branch.

Eventually, maybe miraculously, all the boats were around the bend. The organizers packed things up and drive to the finish line.

At the finish, a group of fishermen sitting along the riverbank may have been surprised to see their quiet, relaxing morning turn into a bustle of activity.

The table and race board were set up near two poles, which formed a straight line going out across the river — the finish line. As the first kayaks came into sight, a man held a stopwatch, tracking the seconds as the racers crossed the finish. The times were recorded on the board.

Soon, a steady stream of canoes and kayaks were crossing the finish line — shouts of encouragement and congratulations welcoming the racers as they came around the final bend.

Meanwhile, the fishermen kept casting away.

SALISBURY — Over the past 224 years, much has been written, told and embellished of President George Washington’s visit to... read more