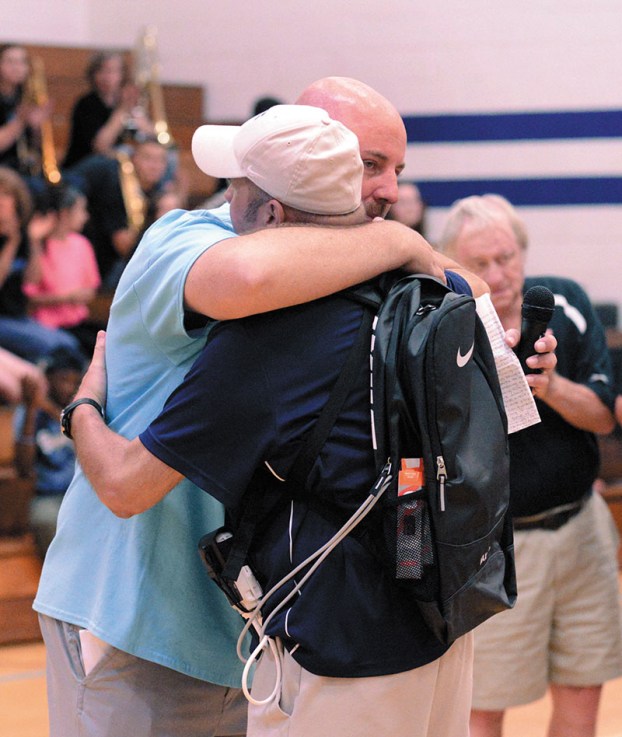 Photo by Wayne Hinshaw / For The Salisbury Post West Rowan basketball coach Mike Gurley (left) hugs Scott Young (right) on Saturday before a fundraiser held at the school. Gurley organized an alumni basketball game to raise money for Young and his family as the former West Rowan head football coach is waiting to receive a heart transplant.

MOUNT ULLA — It was the simplest gameplan Scott Young had ever taken into a game. He had just one goal: don’t cry in front of everybody.

It was a hard plan to execute with former Falcons surrounding him and the crowd cheering for him as he spoke at halftime of the alumni basketball game being played as a fundraiser for him.

“I don’t really care if I cry right now or not,” said Young, choking with emotion. “I never knew how tight-knit this community was. I never knew how many people cared about my family.”

Saturday night at West Rowan included a bake sale, a silent auction and a basketball game with four of the top five scorers in school history, but it was still all about Young, who is recovering from open-heart surgery and will need a heart transplant in the near future.

“I’m not much of a card player,” West Rowan basketball coach Mike Gurley said. “But we’re playing one big game of hearts here, and we’re going to win it.”

The Gurleys, Mike and Annette, were responsible for getting the special night in motion. Then they got a lot of help from a lot of people.

“Coach Gurley and I have had our battles, and we’ve fought tooth and nail at times,” Young said. “But I respect him, and I love him.”

Obviously, Gurley feels the same way about Young, who coached the Falcons to 47 straight wins and three 3A state championships from 2008-10.

“Everybody wants to hug Scott and his family,” Gurley said. “That’s not physically possible to do, but a lot of people were able to show tonight how much they cared. I don’t know yet exactly how much money was raised, but the numbers I’m hearing are very good numbers.”

“It was an amazing night,” said Jarvis Morgan, a 2012 graduate who is part of Gardner-Webb’s football program. “Coach Young was a great father figure for me when I played here, and I always will think of him as a great man and a great friend.

“Anything that I can ever do for coach Young or coach Gurley all they have to do is ask because they created who I am today.”

Morgan was the game’s leading dunker with three throwdowns.

There were 31 successful 3-pointers rained from all angles, including six by the Gym Rats’ Seth Martin, a 2014 West Rowan grad now at Catawba Valley Community College. The Gym Rats also had Keshun Sherrill, a Division II All-American this season at Georgia Regents University. The quickest person on the floor, he scored a breezy 23 points with four 3-pointers and two dunks.

“It was a great call to do this,” Sherrill said. “All of us were excited to play for coach Young. There was nothing to do but play.”

Donte Minter, who played at Virginia and Appalachian State, was in West Rowan’s Class of 2002 and still holds the school record for points in a single game with 44. Minter and Jon Crucitti (2010), a graduate of West Point and Ranger school, cleaned the boards for the Gym Rats.

Clay Browning, a 2008 grad who is now a graduate assistant at UNC, was a receiver for Young and an unlikely playoff hero for Gurley. Browning had a hot-shooting night for the Gym Rats with four 3s.

“I kind of let it fly tonight because I didn’t have to worry about being taken out of the game,” Browning said with a laugh. “I might have  scored more than I did in my whole career at West. It was a fun night, playing with my West Rowan brothers again. Coach Young means a lot to every guy who was here. Even the guys who didn’t play football had him as their weightlifting or P.E. teacher.”

The inside power of Terris Sifford (Class of 2001), Jamel Carpenter (2007) and K.J. Sherrill (2009) kept Young’s Yard Dogs in the game. Sifford scored 19, 10 in the first quarter. Sherrill, who played in Germany last spring, scored 20. Carpenter had 13 of his 18 in a three-minute stretch in the third quarter.

The Yard Dogs got a boost from grizzled veterans Clint Mauldin, Matt Welborn and Ryan “Bam Bam” Mattox, stars of the 1997 2A state championship team. Welborn hit a buzzer-beating 3-pointer prior to halftime. Mauldin made back-to-back 3-pointers in the third quarter. Jerry Sherrill (Class of 1983), the oldest player, connected on two shots.

Gurley huddled players from both teams together after the game. He raised a fist in the air, and all the Falcons, even Dr. Darren Ramsey, who is now a dentist, instinctively yelled “We attack!” just as they always did.

Habits are heard to break. Falcons, no matter where there lives have taken them, are still Falcons.

“There was a lot of Columbia blue blood flowing,” Gurley said. “West Rowan has great people. You could see that tonight in the stands and on the court. A lot of quality people came together tonight for Scott.”