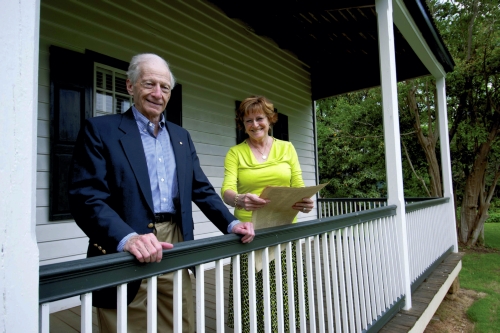 JON C. LAKEY / SALISBURY POST Ed Clement and Susan Sides pose on the porch of the John Steele house. Sides located and purchased a copy of a 1791 Philadelphia newspaper that reported of the visit President George Washington to Salisbury in 1791.

SALISBURY — Over the past 224 years, much has been written, told and embellished of President George Washington’s visit to Salisbury on May 30-31, 1791, during his famous Southern tour.

In fact, historians have debated for years over little Betsy Brandon, and whether she fed Washington breakfast when he stopped along the road on his way to Salisbury. The story goes that the young girl, alone because the rest of her family had gone into Salisbury to see Washington, was kissed by the president for her graciousness and told, “Now, my dear, you may tell your people when they return that you saw George Washington before they did and that he kissed you, too.”

Jethro Rumple’s history of Rowan County relates this story as gospel, as do histories written by Dr. Archibald Henderson and many others. But just as many historians have either ignored the Betsy Brandon tale or totally debunked it as fable, citing evidence that Brandon would have been a married woman of 30 raising up to 10 children at the time. She also probably lived along a route that Washington didn’t even take into Salisbury.

The documented accounts usually listed and referenced for Washington’s visit here have always relied on only three things: the address of welcome to Washington from Salisbury dignitaries of the day; Washington’s short response to that welcome, recorded for history in the hand of his personal secretary; and Washington’s own diary entry from his Southern tour.

Local historian Susan Goodman Sides, whose expertise especially extends to President Andrew Jackson’s time in Salisbury as a lawyer in training and the postcards of bookstore owner/photographer Theo Buerbaum, recently purchased an original copy of the June 22, 1791, edition of a Philadelphia newspaper giving an account of Washington’s doings in Salisbury on May 30, 1791.

To discuss her finding, Sides and well-known Salisbury preservationist Ed Clement met one day this past week at the 1799 John Steele House, also known as “Lombardy,” which Clement lovingly and meticulously restored years ago.

Steele, elected in February 1790 to the First Congress of the United States, reportedly went to Charlotte to meet Washington and accompany him on the trip toward Salisbury.

According to Jim Brawley’s history of Rowan County, it was Steele and Maxwell Chambers who signed the welcoming address delivered to Washington on his visit. But more important, Washington would later appoint Steele as the first comptroller of the United States — a position he also held under Presidents Adams and Jefferson.

“To me, this is really the place this conversation needs to take place,” Sides said.

Because of the age of the newspaper and its small type, Sides spent hours transcribing the article about Salisbury onto her computer. A good portion of it repeats what the welcoming address of Salisbury inhabitants said and the president’s response.

The original copy of Washington’s response, with his signature, is housed in Rowan Public Library, thanks to a 1952 gift from Irvin Oestreicher.

But the new information includes a record of 15 different toasts given at a Salisbury dinner honoring Washington. After each toast, the newspaper account said, there was “a discharge of artillery,” probably the firing of a cannon.

In summary, here’s what each toast saluted:

• “The government of the United States.”

• “The governor and state of North Carolina.”

• “The constitutional liberty of the people.”

• “The committee who reported the declaration of independence.”

• “May Congress take effectual measures to keep alive the military spirit of America.”

• “May harmony subsist between the federate and state governments.”

• “The agriculture, manufacturers and commerce of the United States.”

• “The European powers in alliance with the United States.”

• “May the French Revolution terminate favorably to liberty.”

• “May the services of General Greene be remembered with gratitude by the people of the Southern States.”

• “May reason and not the sword, terminate all national disputes.”

• “May the officers in every department have a secret regard to national justice.”

• “The friends of religion, morality and useful knowledge.”

After the 14th toast, President Washington retired, according to the newspaper, leading to this 15th and final toast:

• “George Washington, long may he live.”

The article makes several other observations. It says on the morning of May 30, Washington was met at the county line and “conducted to his lodgings by a large number of the most respectable gentlemen of the town and country, together with Capt. Stokes’ company of cavalry, completely equipped and uniformed.”

As he rode into the town, the newspaper continues, he was saluted “by about 40 boys, in uniform, who had chosen officers, and arranged themselves for that purpose.”

Later at the courthouse, an artillery company saluted as Washington passed, “and when it was announced that he had entered his lodgings, there was a discharge of fifteen cannon,” the article reported.

Washington rode in on horseback and during the course of the day, according to this account, he gave people plenty of opportunities to see him.

“After some refreshment,” the Philadelphia paper said, “he was waited upon by the Hon. John Steele, Judge M’Cay and Maxwell Chambers, Esq. Magistrate of Police, with a number of other gentlemen, who presented him with the following address.”

After the newspaper records the welcome and response, it notes that his hosts accompanied him to Mrs. Hughes’ residence, where “an elegant dinner” had been prepared.

“On his way to dinner,” the article said, “he passed through great crowds of people who had collected for the purpose of seeing their illustrious and revered Chief Magistrate.

The account noted Washington was cheerful at dinner “and highly pleased with the appearance of the upper county.”

After noting the many toasts and Washington’s taking leave for the evening, the newspaper article weighed in that “the whole was conducted with decorum and festivity, and joy was seen on every face.”

The next morning, May 31, Washington was escorted to the Yadkin River by the same men who had dined with him the night before, plus the cavalry company.

“At parting,” the newspaper said, “he made a short address to the military company, and took leave of the other gentlemen in the most polite and affectionate manner.”

The Philadelphia newspaper was The Mail, which also went by Claypoole’s Daily Advertiser.

“It’s a significant documentation of an important event for Salisbury and the county,” Clement said. “Susan is so nice to share it with everyone.”

Clement and Sides said they had never before seen an individualized accounting of the toasts made at the Washington dinner in Salisbury. Sides bought the 1791 newspaper from Stephen A. Goldman Historical Newspapers, an Oxford, Md., dealer.

She also bought a tavern bond issued in 1774 to Elizabeth Maxwell Steele, John Steele’s mother. Sides asked Clement whether he would grant her permission to display the 1791 newspaper and the tavern bond at the Steele House when it  is on this year’s OctoberTour.

Elizabeth Maxwell Steele famously gave considerable money from her tavern earnings to Gen. Nathanael Greene in 1781 after the American general had come to Salisbury worn out, discouraged and broke, but he left Salisbury rejuvenated and restocked for some important victories to come.

Elizabeth Maxwell Steele died in 1790, so she wasn’t on hand for Washington’s visit.

John Steele represents one of the more important political figures in Salisbury’s history.

“Born in the western frontier town of Salisbury in 1764,” the late George Raynor wrote of Steele in 1985, “he lived through the period of the Indian wars, the American Revolution, the forging of the nation through the U.S. Constitution and the wrangling developments of the early years of the Republic.

“And through contacts and letters, he knew a host of the foremost personages of that period, including George Washington, Thomas Jefferson, Alexander Hamilton, John Adams and all of the North Carolina leaders. He held offices ranging from that of town assessor when he was only 20 to U.S. Comptroller of the Treasury under three presidents.”

Besides being comptroller and a member of the First Congress, Steele also was a delegate to the state convention that considered adoption of the Constitution and was oft-elected to the House of Commons, including on the day of his death in 1815.

As U.S. comptroller, second in authority to the treasury secretary, Steele had to sign every check coming out of the department.

Steele was a tremendous letter writer, and his correspondence fills two bound volumes to which Clement often has referred over the years. His letters and 22 boxes of other materials are part of the Southern Historical Collection at the University of North Carolina.

There are, for example, letters between Steele and Jefferson, Hamilton and James Madison.

In various rooms of the Steele House, the city’s oldest residential structure, Clement has placed placards with things taken from Steele’s letters, often written from either Philadelphia or Washington while he was serving as comptroller.

On a stand in the dining room, for example is an except from a Jan. 31, 1793, letter Steele wrote home to his wife, Mary. It said, “The President today asked me to drink a glass of wine with him, this is considered here a great honor.”

Steele was referring to Washington. Clement reiterated what a honor it was for Steele, given Washington’s stature at that time.

“This guy was highly admired,’ Clement said of the first president. “They would have easily turned the government over to him as a dictator.”

What was Washington’s impression of Salisbury on his visit here in 1791? His diary from the Southern tour offers a good clue.

“Salisbury is but a small place altho’ it is the County town, and the district Court is held in it;” Washington wrote, “nor does it appear to be much on the increase. There is about three hundred souls in it and tradesmen of different kinds.”

A toast: George Washington, long may he live.

1. Why was the recent retirement of N.C. Department of Transportation truck driver Hubert Elliott of special note? A. He... read more