Love that pig: Jiggy with the Piggy draws thousands for food and fun in Kannapolis 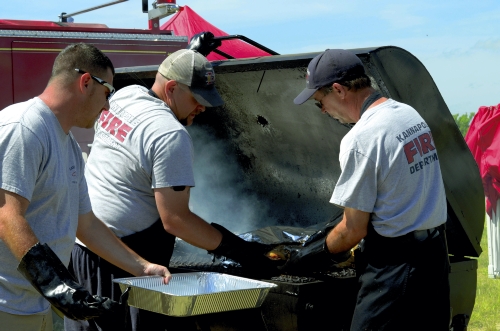 Hugh Fisher/For the Salisbury Post. Kannapolis Fire Department members volunteer to cook barbecue for the Kannapolis Firefighters Assistance Foundation, during the Jiggy with the Piggy Festival on in 2015.

KANNAPOLIS – It was a case of “living high on the hog” Saturday, as the annual Jiggy with the Piggy Barbecue Challenge and festival returned to downtown Kannapolis.

West Avenue was packed with onlookers throughout the morning for live entertainment and a downtown street fair.

Eddie Smith, deputy city manager of Kannapolis and organizer of the event, said 75 barbecue cook teams competed in the event, which was sanctioned by the Kansas City Barbecue Society.

Putting the event together is no small task. “We have over 100 judges come from six states,” Smith said.

Smith estimated total attendance at all the events – including Friday evening’s People’s Choice chicken wing competition – at over 10,000.

Attendees, Smith said, “are going to be coming to Cabarrus to see what kind of show we can put on.”

Around 11 a.m., the teams at their campsites were getting ready to kick into action.

At noon, the first round of judging was set to begin as teams turned in their entries in the chicken category.

“It’s game time right now for them,” Smith said. Generally, cook teams take turns checking the cooking meat throughout the night to make sure the proper temperatures are maintained.

“These teams make a major investment to compete in barbecue events,” said Smith, who was formerly a member of a competition barbecue team.

In addition to the cost of food and materials, many invest large, specially-designed smoker grills and other equipment.

The field included some faces that were familiar to viewers of the “BBQ Pitmasters” television show.

Rocky Top Barbecue proudly displayed trophies from previous competitions, while nearby, at Checkered Pig BBQ, Tommy Houston checked on the cooker as the minutes counted down.

“This is one of the best venues we go to,” said Houston, the defending Jiggy with the Piggy grand champion and defending champion of the Old North State Barbecue Series.

At Big Show Barbecue, Carl Lewis and Mat Griner, of Goldsboro, stood in front of pictures of radio personalities John Boy and Billy, who sponsor the team.

“This is one of our favorite contests,” Lewis said. “We’ve been coming to it since it started in 2013. The competition has been incredible.”

All kidding aside, Lewis said it was good to get to see their former “BBQ Pitmasters” rivals and take part in the competition.

“At the end of the day it’s all good fun and we’re always friends. That’s the main thing,” Griner said.

At the campsite of team Keep Calm and Cue On, Matt Harris and Jason Nelms made their final preparations to turn in their entries.

Harris and Nelms are from Kannapolis, and said it was good to be able to compete in their hometown. “We absolutely love it,” Nelms said. “It’s a challenge.”

Kannapolis City Councilman Roger Haas, who was volunteering at the People’s Choice barbecue tasting, said he had talked to residents who said they were proud to see the crowds and the attention the festival had drawn.

“That’s what you’re trying to accomplish, trying to let people see Kannapolis as it truly is,” Haas said.

In addition to the tastings, the Kannapolis Firefighters Assistance Foundation sold fresh barbecue to the crowd.

Firefighters and volunteers manned the grills and tables, moving large amounts of barbecue.

This is the first year that the barbecue sale fundraiser has been held alongside the People’s Choice competition, which is also a fundraiser for high school scholarships.

Jordan summed up the attitude many have about competition barbecue with his comments about the charity sale: “It’s a lot of work, but it’s a lot of fun, too,” Jordan said.