Fiscal year 2016 looks to be transformational for animal shelter 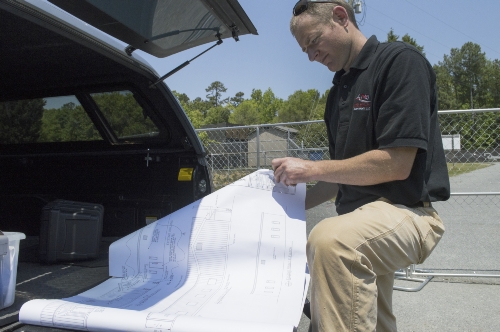 Josh Bergeron / Salisbury Post - John Sipe, a contractor for the Rowan County Animal Shelter Expansion, looks over drawings for a new cat wing that will double the shelter's size.

Changes at the animal shelter began last year with a new cat wing, but are picking up steam with the 2016 fiscal year beginning in July.

Among the proposed changes are a cat wing expansion that’s almost doubled in price since its initial conception, a budget increase of approximately 20 percent and a number of policy recommendations currently being drafted by a shelter task force. Construction on a cat wing of the Rowan County Animal Shelter began last week and County Manager Aaron Church says the shelter will see a significant boost in expenditures when he presents his budget to commissioners.

Winston-Salem philanthropist Christine Morykwas in 2014 proposed a shelter expansion that would be exclusively used to house cats. At the time, the expansion was about 2,300 square feet. The cost to build the facility started at $500,000., and quickly grew to over $800,000. Now, Morykwas’ donation total is about $1 million. The county’s space needs study listed the facility as containing more than 3,000 square feet.

After taking on shelter-building projects in California, Winston-Salem and other cities, Morykwas said a new adoption wing became the only way to keep cats healthy and reduce the euthanasia rate in Rowan County.

“There is no separate air system, so airborne illness easily spreads to all the cats,” Morykwas said about the shelter’s current condition. “The cats are also housed in open pens next to the dogs, which is very stressful for them and can also contribute to illness. All of this had to change to give these cats a chance at being adopted before they became ill and are euthanized.”

This week, slabs of concrete and asphalt were removed to help with the relocation of water and power lines.

The new wing includes separate rooms for adoptable and quarantined cats, anti-microbial floors to prevent virus and disease and separate ventilation systems for individual cat rooms is included in the new wing. During conversations with county officials about plans for the shelter, Morykwas said costs increased. Bathrooms and a conference room were examples of an additions to the original plans, she said.

“If you’re going to do it, do it right or don’t do it at all,” Morykwas said.

As a result of the new animal shelter wing, Church says the county would need to hire two full-time and four part-time employees. An increase in expenditures is also included in the shelter’s budget for when the county implements its spay and neuter program — currently scheduled to start on July 1. Commissioners haven’t yet approved a final contract with a veterinarian for the spay and neuter services.

Other changes discussed during task force meetings include: a $5 increase — to $75 — in the adoption fee to help pay for vaccines and medicine; a trap, neuter and release program and new software for the shelter. During Thursday’s meeting, community members of the task force also asked for the shelter staff to be more transparent and fair about adoption-related policies.

When talking about the shelter expansion, Morykwas also mentioned the need for more time for non-profit groups to take pictures of shelter animals.

“Photos can literally save an animal’s life,” she said.

Morykwas said she personally adopted a cat after seeing a Facebook photo.

“It was the sickest, one-eyed cat I could find,” she joked.

“It’s not going to all happen overnight,” she said. It will slowly come. It’s not just about a great facility, but all the pieces that go with it.”