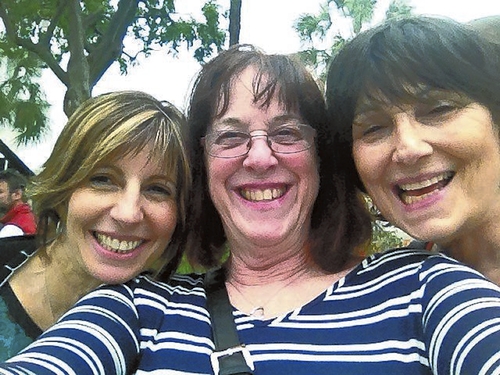 Submitted photo Sandy Bennett, Michele Lobl and Carol Ben-Moshe spent the day in Salisbury Thursday visiting some of their childhood haunts, including the old Smoke Shop downtown which their parents, Herman and Evelyn Hyman operated from 1952-72.

SALISBURY — The way they were peering into the front window of the empty downtown building, the women resembled little girls again, and for at least a day this week, they were.

“When I said it was 8 feet wide — that’s what it is,” Carol Ben-Moshe of New York City said to her sisters Michele and Sandy.

Decades ago, this long, narrow store — one of several retail establishments on the Empire Hotel building’s ground floor —  was central to the women’s lives. Their late parents, Herman and Evelyn Hyman, owned and operated the Smoke Shop here, at 218-B, or 218 1/2 S. Main St.

The front of the store (not to be confused with the State Smoke Shop across the street) had all the day’s newspapers, magazines and comic books. One or both of the Hymans usually were behind the counter, minding the cash register and serving up fountain drinks and sandwiches. Farther back, separated by a partition, regulars could sit down and have a beer.

Out front, their entrepreneurial son, Jeff, sometimes set up the popcorn machine he had bought from Dan Nicholas.

And every morning before he opened the shop, “Hy” Hyman, also called “Honey” by his friends, stopped by the depot to pick up copies of the New York Times, which came in by train. The former Brooklyn resident, a podiatrist by training, was proud to have the only place in Salisbury where you could pick up the Times.

“It’s really kind of surreal to be back here,” Sandy Bennett said. “It’s hard to explain.”

The sisters converged on Salisbury from all points of the United States. Bennett traveled from Cooper City, Fla. Michele Lobl flew in from her home in Valencia, Calif., and Ben-Moshe came from Manhattan, where she lives in the West Village.

At least once a year since their beloved mother’s death in 2012, the sisters have made it a point to spend time just with each other,

“When we get together, we don’t stop laughing,” Ben-Moshe said.

This year, they decided to revisit their childhood haunts in Salisbury as a way of also celebrating Michele’s 70th birthday. Michele, a 1963 graduate of Boyden High School, hadn’t been back to Salisbury in at least 45 years.

In Salisbury, the sisters met up with Phyllis, David and Sam Post. The Posts were always like a second family for the Hymans, and Rose Post and Evelyn Hyman were great friends.

During their one full day in Salisbury Thursday, the women visited places that held many childhood memories — the Smoke Shop, neighboring storefronts, their old schools, former homes and the places they played.

They also stopped by the temple and the Jewish cemetery at City Memorial Park, and Michele was able to have lunch with a friend at Hendrix Barbecue on West Innes Street, where the Blackwelder’s hangout was located in her day.

“I’m going to go walking this way,” Michele said, taking off from the Smoke Shop toward the Square. “I have more memories this way.”

The Hymans were part of a small but vibrant Jewish community in Salisbury, many of whom were merchants. “It was a great town to grow up in,” said Sandy, who as a 13-year-old moved with her parents when they closed the Smoke Shop in 1972 and settled in South Florida to manage a family restaurant.

Michele was part of the last eighth-grade class at Frank B. John School, and Carol attended Knox Junior High when it was brand new, before graduating from Boyden High (today’s Salisbury High) in 1966. Both Michele and Carol were born in Brooklyn and moved to North Carolina as little girls in 1952, when their parents started working in the Smoke Shop.

Jeff and Sandy were born here.

The whole family experienced a cultural shock in that 1952 move from Brooklyn to the South, before air-conditioning.

Michele said she came home every day from kindergarten crying.

“I didn’t understand what they were saying,” she said of her teachers’ and playmates’ Southern accents.

There’s also the famous story of Uncle Maxie, a New York cab driver, who came to Salisbury for a visit, and the Hymans put him to work behind the Smoke Shop counter.

A Salisbury woman came in and asked for a Coca-Cola with ice.

Uncle Maxie couldn’t understand a word she had said, and the two went back and forth for five minutes trying to interpret each other.

“Where do you come from?” the woman asked Uncle Maxie, who finally understood her words.

“I knew you were from a foreign country,” the woman said.

The Hyman family rented places on West 11th Street, Mahaley Avenue and West Council Street close to the old YMCA. “We lived at the Y,” Sandy said. During the summers, the girls were usually at the outdoor pool and also participants in the Y’s summer camp program.

When the Hymans bought a house on Rutherford Street, nearby City Park became a favorite place to fish and play tennis — a sport at which the whole family was accomplished.

Carol said they would fish for bream in City Lake with a bamboo pole. Their bait was wadded up white bread, and Hy would always spit on his daughters’ bread for good luck. It seemed to work. He also was the one asked to take the fish off the hook if they caught any.

By the women’s description, their father was a smart, warm, family man who had a great singing voice. He was laid back — “very chill,” Sandy said. “He liked being around people,” Michele added.

Herman Hyman always opened up the Smoke Shop in the mornings, and Evelyn would take over in the middle of the day before he returned in the evenings to close up.

The Smoke Shop was open seven days a week. He usually asked the kids to man the shop on Sundays, when members of First United Methodist Church often came in the back door for their Sunday papers and coffee.

When they think of the shop, the sisters talk of the New York Times Sunday papers, the frosted malt machine, 23-cent packs of cigarettes, chocolate egg creams and other candies, scooping ice cream, reading all the comics and noticing how their parents often took in “strays.”

Interstate travelers, usually from the north, might stop in the shop and soon they were being invited back to the Hymans’ house for dinner.

“It was our home away from home,” Ben-Moshe said of the Smoke Shop. “For me, it was such an important part of my childhood.”

They also speak fondly of the Kids’ Day parades, Holiday Caravans, dog parades and the downtown theater that would allow you to attend Saturday shows for free with six bottle caps. Getting bottle caps was never a problem when your parents owned the Smoke Shop.

The women remembered how their podiatrist father thought it was healthier for his children’s feet for them to go barefooted. Aunts, uncles and cousins who visited Salisbury also misinterpreted the barefeet, assumed the family was poor and often brought them shoes and other clothing.

Truth be known, their father loved sports and hated podiatry, the sisters said, though the family likes to tell the story of his being the podiatrist for actress Barbara Stanwyck. Herman Hyman died in 1981 at the age of 69.

The women can’t hide a glow that seems to seep into each one of them when they speak of their mother, also known as “Evie.” She was vivacious, loving, positive and full of laughter. She loved her bridge clubs and tennis, which she played quite well into her late 80s.

“Mom had a way of making everyone around her feel as though they were the most important person,” Sandy said.

When the sisters would ask their mother where she might like to go on a trip, Evelyn’s answer would be, “I just want to go have a good laugh.” She usually did.

“There was always laughter in our family,” Carol said.

Today, Sandy is a certified public accountant and owner of a property management company. Carol, who worked 33 years as the travel manager for New York Daily News, is retired and enjoying her time as a yoga instructor. Michele also has retired as a longtime employment counselor and author of two books.

Ben-Moshe recalled a time some years back when she was still working for the Daily News and decided to stop in Salisbury. She went downtown to see the little storefront that once held the Smoke Shop.

It was empty, but she swore she saw her father standing outside. A bit unnerved, Carol then walked down the street to Zimmerman’s clothing store and asked to see her old friend, Eddie Post.

“The minute I saw Eddie, I started crying,” she said. “I could not gain my composure.”

During the same trip, she drove up to the Hyman family’s old houses and found herself knocking on doors and being greeted by bewildered occupants. Carol said she thought she was living out an episode of the “Twilight Zone.”

“After that trip, I said you can never go home again,” Carol recalled.

But this week’s trip back went much better, and after their day in Salisbury, the women traveled together to Asheville for a long weekend.

The sisters’ Salisbury story would not be complete without better mention of their brother, Jeff has always been one of the top sales executives with any of the major companies for whom he has worked. He lives in Florida today. His sisters say their brother could sell ice to an Eskimo.

“He was the kind of salesman you like,” Sandy added. “He’s different from the rest of us.”

As a youngster, the fearless Jeff Hyman visited Dan Nicholas and asked the businessman to lend him $100 toward the purchase of one of Nicholas’ popcorn machines. Nicholas liked what he saw in the boy, and Jeff quickly was in business, not only selling popcorn outside the Smoke Shop but hawking it at American Legion baseball games.

Sandy and one of her friends would work for him at the games. By the time he was 16, Jeff had saved enough money from his popcorn business to buy his first car. Like his father, Jeff also was a good athlete, starring in Little League baseball and often teaming with Sam Post as a tennis doubles partner.

The sisters actually asked Jeff if he might want to meet them and be part of their nostalgic trip back to Salisbury.

It makes the sisters laugh again.

SALISBURY — The Tom E. Smith Nature Exploratorium is such a long, bulky name for a place where kids can... read more