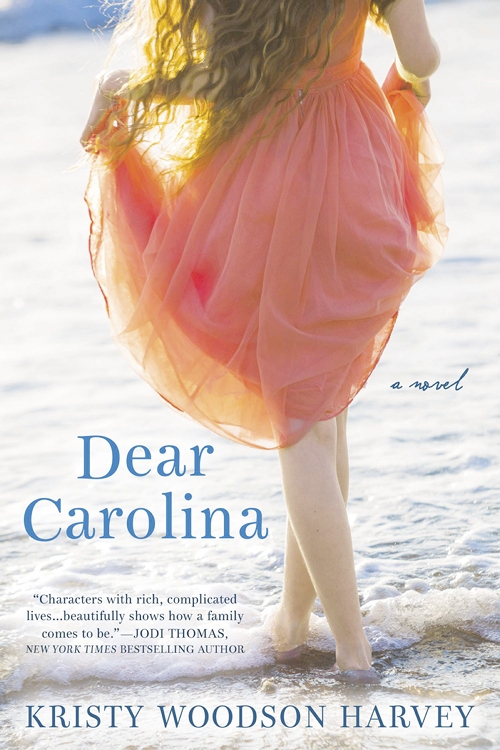 First, a disclaimer. Kristy Woodson Harvey was an intern at the Salisbury Post in 1999, one we enjoyed having around. Secondly, she’s the daughter of Salisbury Mayor Paul Woodson.

That out of the way, her debut novel, “Dear Carolina,” is a sweet thing, full of hope and promise, and the perfect vehicle for a young mother, like Kristy, to start her writing career.

The book is written not so much as letters to Carolina, a much loved child, but more as storytelling, as if the two women are sitting down with their girl and telling her where she comes from.

Khaki is a confident, driven young woman who has lived through the early death of her first husband. She’s lucky, too, because she has Alex, the child of that early marriage, and Graham, her childhood love who sweeps her up and spoils her with his love and attention.

They are a happy family. Graham works on a large and prosperous family farm operation. Khaki is an interior designer, with a store in New York, and an apartment, and chic clients. They split their time between Kinston (where Kristy lives with her dentist husband) and New York City.

Khaki seems to have to it all. A career, an adoring husband, a happy child. But she yearns to have a child with Graham, and though they’re very good at trying, Khaki has not gotten pregnant. She’s getting frustrated and more than a little scared that she will never have another baby.

Then there’s Jodi, cousin to Graham, a poor teen whose beloved father died young of cancer and whose alcoholic mother has serially ignored her. Alcoholism runs in the family, and Jodi’s been through treatment already.

Jodi also has Ricky, a loser boyfriend who preys on her desperate need for love and her generous nature. He, too, has an alcohol problem, which just drags Jodi down further. But she has quit drinking, at least for now, when she discovers she’s pregnant. Ricky, being the great guy he is, splits, with the truck Jodi co-signed for.

Jodi works as a mechanic, but loses that job when the boss decides customers don’t want to see a pregnant employee. Jodi frets about how she will raise the baby, how she can work and take care of a child, how she’ll make payments on the trailer and the absent truck. But most of all, she thinks about drinking.

When Ricky does show up again, it’s with a broken bottle and hatred in his eyes. Jodi escapes, and Khaki’s father makes sure Ricky won’t come back. Ricky signs away rights to his daughter.

Jodi, now terrified in addition to everything else, goes so far as to buy alcohol, ready to open that bottle at any moment.

You can easily guess what will happen. Khaki and Graham adopt Jodi’s baby, Carolina. Khaki’s desire for a baby rules her heart and her head and she’s determined to raise that child. Jodi sees her situation as hopeless, and turns the baby over with tears and relief.

But that’s just the beginning. The families have to figure out how all this will work, with birth mother Jodi just down the road. They’re incredibly flexible and cooperative, and Graham and Khaki work on ways to help Jodi get back on her feet and find her place in the world.

The interest comes in seeing the two women grow and evolve. And it’s also interesting to see how completely Khaki falls in love with Carolina, how thoroughly she possesses the child, and how Jodi accepts the arrangement.

Jodi, especially, changes as the story progresses, going from a smart but uneducated country victim to a stronger woman with plans for the future and the strength and guts to pursue them.

A couple of things stretch belief. One is how Khaki, at 31, is a design mogul with money and clout. The other is how alcoholic Jodi has enough unclouded good sense to know there is something better out there. And how the two women do not take advantage of each other.

It’s really a perfect book for young mothers in this day dedicated to them. It’s an easy read, engaging but not taxing. It’s comforting to read about love, honor and success in spite of obstacles. It’s the kind of book where you might worry at times that disaster will strike, but good prevails.

Jodi worries that she doesn’t deserve a second chance, but comes to accept that she does have one and she’s going to work hard to succeed.

Khaki worries that she hasn’t paid enough dues for her luck and happiness. But Pauline, the family’s long-time housekeeper reminds her, ” … whenever you start to feeling guilty, you drop to your knees and thank the Good Lord up above for everything he give you.”

Kristy is lucky, too. This is what she wants to do. If this book is successful, she’ll be on her way to her dream.