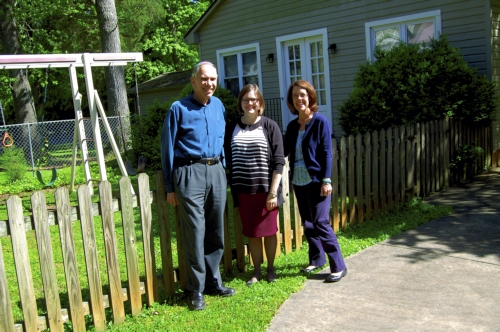 Interfaith communal sharing is nothing new at the 1600 block of Brenner Avenue in Salisbury, where John Calvin Presbyterian Church and Temple Israel synagogue both stand. The two religious groups share in an annual Thanksgiving potluck meal that goes back over 40 years, work together in community volunteer efforts, and have even shared the same custodian for more than 50 years.

And so it makes perfect sense that when the Charlotte-based Piedmont Unitarian Universalist Church, or PUUC, was seeking a religious space to rent as a Salisbury satellite location in August of 2012, Temple Israel was the first community to open its doors to them.

Many religious groups that the PUUC — a liberal and open church — initially reached out to in a rental inquiry responded with a surprised, “UU who?” says Reverend Robin Tanner, lead minister at the Piedmont Unitarian Universalist Church since August of 2010. “Some had fears about who we were and what we were about. But with the temple, there was an openness from the first conversation.”

“It’s a waste to just let the space sit there, particularly when there is a group with a compatible need that we can welcome and provide a space for,” says Rabbi Andrew Ettin, leader of Temple Israel for the past 25 years and proponent of interfaith outreach.

Since they began renting the space, the PUUC has painted the walls and hung artwork in the temple’s fellowship hall, and really made the room their own. But with the PUUC’s growth in the Salisbury area — an increase from 10 to 30 adults in less than three years, plus increasing numbers of children, — the church discovered in recent months that they were outgrowing their home at the temple.

Tanner discussed this overflow dilemma with Pastor Kellie Browne of John Calvin Presbyterian Church at an informal interfaith meeting of female clergy and retired clergy in the area. At the meeting, Browne uncovered a simple solution, and one that would forge another interfaith bond on Brenner Avenue: The PUUC could use John Calvin’s outbuilding, affectionately called “the hut,” as their religious education facility.

The PUUC began using the hut in late January of this year. After a children’s sermon is shared at the PUUC service at Temple Israel, children of the congregation exit a side door of the temple and follow a grassy path over to their next-door quarters for religious education. The children enjoy the peaceful rooms within the hut, along with the fenced-in playground just outside of the building.

Tanner and her congregation are grateful for the great lengths that John Calvin and Temple Israel have gone to, to give the PUUC a warm reception. “We all cherish and love our spaces. Then you bring another group into your home, and it really does take some radical hospitality,” says Tanner.

Both Ettin and Browne feel that interfaith connections and generosity come naturally to their congregations.

“John Calvin has always looked beyond the walls,” says Browne. “Shared ministry is a really good fit for who they are.”

And for all three religious leaders, their relationships with one another are much more than that of landlords and tenant.

At its core, the Unitarian Universalist Church seeks to embrace diversity and uplift the freedom of religion and individuality for all. The product of the merging of the Unitarian and Universalist churches in 1961, the UU church is primarily composed of converted members; Some congregation members have had no religious upbringing, while others come from Jewish, Christian, Buddhist, agnostic or atheistic backgrounds.

“What holds us together is that rather than a doctrine or a creed, we are orthopraxic,” — focusing on integrity and principles over belief — says Tanner.

Members are often drawn to the UU church because they seek a spiritual community that is beyond belief, 31-year-old Tanner says. “It’s really hard to make the world a better place alone.”

And pulling together on commonalities is what the property sharing on Brenner Avenue is all about. While discussing their rental arrangements earlier this week, the minister, pastor and rabbi of the three religious groups had many ideas for future opportunities for interfaith sharing and learning.

“We have far more in common than the small differences based on liturgy,” says Browne.

Learning about the religious perspectives of others can be extremely valuable, Ettin says, and being a part of a broader faith alliance just feels good.

“The reality is that we live in a multi-racial, multi-cultural, and multifaceted community,” says Tanner. “We shouldn’t segregate ourselves on Sunday. Sunday should be a reflection of the communities we live in.”

By Shavonne Walker shavonne.walker@salisburypost.com EAST SPENCER — Prayer is what’s needed in these difficult times — that’s the message that... read more