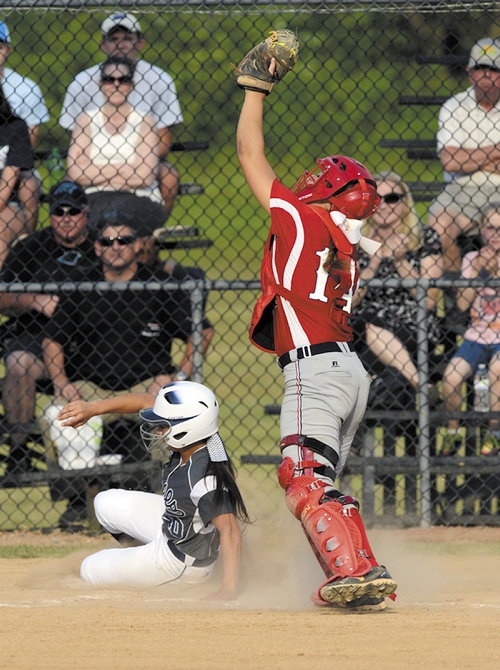 photo by Wayne Hinshaw / for the Salisbury Post East Rowan’s Kaleigh Troutman (14) catches a high throw as Hickory Ridge’s Dakota Christie (10) scores. The Ragin’ Bulls rallied past the Mustangs on Thursday in the South Piedmont Conference Tournament final to clinch a spot in the 3A state playoffs. For East Rowan to make the playoffs, it needs a wildcard berth.

CONCORD — East Rowan’s Kaleigh Troutman powered two home runs in what likely was her final high school game, but an even bigger story Thursday was the unveiling of a potential softball dynasty at Hickory Ridge.

The Ragin’ Bulls scored seven runs in the bottom of the sixth and beat East Rowan 13-7  for the South Piedmont Conference Tournament championship with a lineup comprised of eight sophomores and a freshman.

“Usually seven runs will win a championship game,” Troutman said. “We tried hard, but it just didn’t fall right for us. And Hickory Ridge can hit. One through nine, they all hit.”

Neither the fifth-seeded Hickory Ridge nor seventh-seeded East Rowan were supposed to reach the championship game, but it’s been a crazy year in a crazy league.

“We beat our league’s No. 3 seed (Central Cabarrus) three times and we won two out of three against the No. 2 (Northwest Cabarrus),” East Rowan coach Mike Waddell said. “But we couldn’t beat No. 6 (Cox Mill) or No. 8 (South Rowan). The teams in this league just beat each other up.”

The Mustangs (9-11) made a good run at it in the title game and took the lead four different times. East Rowan had 11 hits. Elane Kepley had three, while Bree Medlin and Troutman had two apiece.

For Hickory Ridge, Malaya Black had three hits. Gracyn Polk, Dakota Christie and Breezy Yelton, the winning pitcher in
relief, had two each.

Medlin pitched out of a jam in the first inning, leaving Bulls stranded at second and third. A solo homer to right-center by Coryn Soul put the Mustangs ahead 1-0 in the second.

With the Mustangs trailing 2-1 in the third, Troutman smacked a liner that skipped off the glove of center fielder Malia Black and disappeared over the low fence for a 2-all tie.

Kepley’s bouncing single up the middle in the fourth
provided a 3-2 lead for the Mustangs.

With the game tied 3-all in the fifth, Troutman scored on a wild pitch, and Kepley drove in a run with a blooper for a 5-3 lead.

“We were taking advantage of every chance we got,” Waddell said.

“We were down 4-0 to Carson in the first round and down 4-0 to West Rowan in the semifinals, so we’d gotten used to coming back,” Hickory Ridge coach Patrick Helm said. “Late in this season, we’ve been more selective at the plate, getting better pitches to hit, and our bats came alive. We weren’t getting timely hitting early in the year. Now we are.”

Hickory Ridge’s three-run fifth was aided by two hit batsmen and a throwing error. Anna Shafer relieved Medlin with one out and escaped an ugly inning with the East trailing 6-5.

Taylor Merritt’s infield hit started the East Rowan sixth. Troutman followed with a laser over the fence in center to put the Mustangs ahead for the final time.

“That was a line shot,” Waddell said. “That ball never got more than 20 feet off the ground. She put a good, hard, level swing on it.”

In the bottom of the sixth, Hickory Ridge sent 12 batters to the plate, pounded five hits and benefited from three errors.

“There was a bloop hit early in the inning that we were about three inches from catching, and it would’ve been a double play,” Waddell said. “They would’ve scored zero instead of seven, but it’s a game of inches.”

Malia Black’s two-run single put the Bulls ahead 8-7. Then No. 9 batter Dakota Christie, a freshman who had a huge hit in every game in the tournament, walloped a no-doubt, three-run  homer to make it 11-7. That was the knockout punch.

“It was a great ballgame, and that final score won’t tell the story,” Helm said. “East Rowan played great the second half of the season.”

Hickory Ridge secured the SPC’s No. 2 seed for the 3A state playoffs. West Rowan will be No. 1. Northwest Cabarrus fell to No. 3. Other teams are eligible for wild cards.

“I don’t know how the wild cards will play out, but I really hope we get to keep playing,” Waddell said. “We were playing our best softball at the end.”

GRANITE QUARRY — This year’s South Piedmont Conference tournament was an upside-down affair, but Brandon Taylor was cool with that.... read more