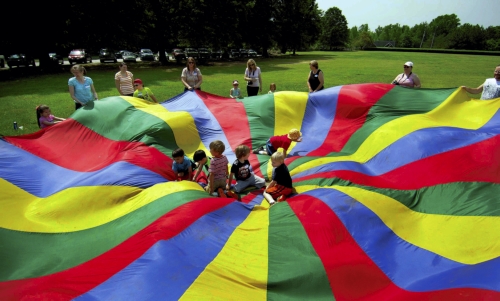 “This is our largest event,” said Trudy McNeil, mother of three home-schooled children.

“Today we had great weather,” she said. “We never know.”

The students rotated through stations with different games in a large field. They held relay races, Frisbee and tennis ball throwing competitions, sack races, pool noodle wars and played with parachutes. They wrapped up the games with a middle school and high school water balloon fight.

“The kids have so much fun,” said Carla Shaver.

Shaver, who home schools her two children, has organized the field day for the last five years.

The students varied in age from preschool to high school seniors, and they splurged on snow cones and pizza.

The younger children were engrossed in the games. For the high-schoolers, it was an opportunity to hang out with their friends.

“It was really good and I want to come back next year,” Keon added.

It was the Franz’s first year home schooling and first year at the event.

“It’s good to get them out of the classroom and socializing with the other kids,” said Keon and Emery’s mother, Kristine.

“They don’t feel like they’re missing out in public school,” she added.

Charles Nettles, who’s been home schooling for the past 29 years, said the home school association has “been having it for about 20 years.”

“It was real small to begin with,” he said.

Over the years, though, it’s grown tremendously.

“It’s been this big at least 10 years,” said Tammy Brown, mother of four.

“We’ve had people join the association just to join the event,” Nettles added.

By David Purtell david.purtell@salisburypost.com Business is getting better for S.A. Sloop Heating and Cooling of Landis, people with the company... read more