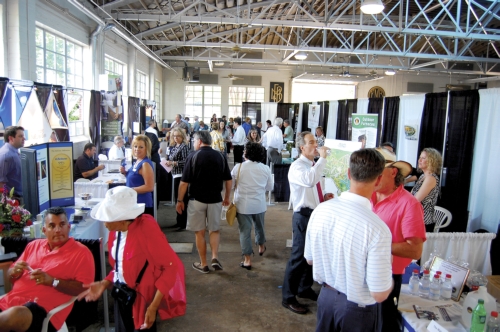 david purtell/salisbury post Hundreds of people attended the Rowan County Chamber of Commerce Trade Show on Thursday at the F&M Trolley Barn. The event connects businesses with potential clients and other companies. Over 70 exhibits were at the show.

Business is getting better for S.A. Sloop Heating and Cooling of Landis, people with the company said Thursday at the Rowan County Chamber of Commerce Trade Show.

Stanley Sloop said business is picking up as the economic recovery moves along, but that the amount of business the company does in Rowan still lags behind the amount it does in neighboring counties such as Iredell and Cabarrus.

He said he was looking to build new relationships and market his business by having a booth at the trade show.

The show, now in its 18th year, was held at the F&M Trolley Barn on Liberty Street. More than 70 exhibits were on display and all of the booth space was sold out

Midway through the show, Chamber of Commerce President Elaine Spalding said the event was going great. Over 500 people had been there by 5 p.m. The event started at 2 p.m. and lasted until 7 p.m.

She said businesses are looking to expand and that the trade show is a great way to market a business and make new connections.

Martha Bostian, who led the event’s organization, said the show also supports the local community — having the event near downtown Salisbury brings customers to businesses in the area.

Spalding said the event had good support from its sponsors and chamber members.

Mike Oliver came to Salisbury in December after taking the general manager position at the Courtyard Marriott near Interstate 85. In his 20 years with Marriott, he said, he’s never seen a hotel as consistent as the Salisbury one when it comes to having a high number of occupied rooms.

The company that owns the Marriott, BPR Properties, decided to build another hotel next to the Marriott because business is going so well, Oliver said.

The Rowan County Chamber of Commerce Trade Show was a great opportunity for him to make business connections and learn about the area, he said.

Morgan Ridge Vineyards supplied drinks and El Patron Mexican Grill cooked up food at the show. Prizes were raffled away and many businesses at the show had goodie bags for people.

Brian Knott, with Statesville Roofing, said his company has been adding to its building restoration sector. He said the event was a good way to get brand recognition for the company and educate people about what the business offers.

Business seminars were held before the show started. Seminar topics ranged from how to use social media to enhance a business to the importance of running good background checks on potential employees.