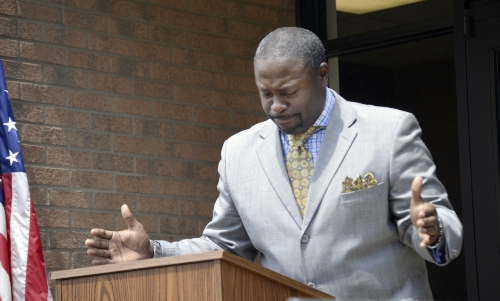 Outreach Christian Ministries International Pastor Bradley Taylor speaks during a Thursday National Day of Prayer event held in front of the East Spencer town hall. The National Day of Prayer is an observance held each year on the first Thursday of May. The observance is a time for people of all faiths to pray for the nation and their communities. Shavonne Walker/Salisbury Post

EAST SPENCER — Prayer is what’s needed in these difficult times — that’s the message that was spread amongst people who assembled for a National Day of Prayer event held Thursday in front of East Spencer town hall.

The National Day of Prayer is an observance held on the first Thursday of May that invites people of all faiths to pray for the nation, their local leaders and communities. It was created 63 years ago by a joint resolution of the U.S. Congress.

“We need to allow prayer to take its rightful place in the community,” Taylor said.

He encouraged those assembled to take on an active prayer life.

“When you don’t have a prayer life, it’s like swimming without coming up for air,” he said.

“If this nation was founded on God, then why are we trying to put him out of it?” Taylor asked the gathering.

He said just because it’s said there should be no more prayer in schools or in government settings, people can still pray before they get there.

“I think it’s important, because life in general is very difficult, and we all are faced with things that can overwhelm us. Prayer can strengthen and remind us there is something with power to take care of what is seemingly impossible to take care of, and there is a higher power working on our behalf,” Taylor said.

“It’s always an uplifting time to observe for our country, our county and citizens so we can continue on this blessed journey we are on,” Mayor Barbara Mallett said following the event.

Taylor’s mother and co-founder of the church, Evangelist Alease Taylor, said she thinks it’s important to pray throughout the year.

“Why would we serve a God and don’t communicate with him? By the word of his mouth, everything was formed, and he wants to hear from his formed individuals. It’s a must to talk to him,” Alease Taylor said.

Public Works employee Howard Miller attended the event with other members of the public works department.

“Prayer is good. Everybody needs a little prayer. A lot of people are not praying, and we can see where the world is heading,” Miller said.

“Prayer is fundamental in any success,” said Elder Linda Hunt. “Our founding fathers knew that prayer was key.”

Other communities and individuals gathered throughout Rowan County to hold similar National Day of Prayer services.